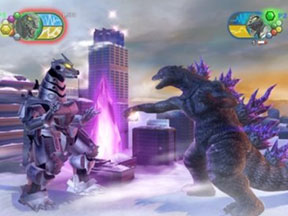 Unleashed is fun, but only for true fans

At first glance, Godzilla: Unleashed looks like it might be a pretty interesting game. It promises interactive environments of large cities around the world, multiplayer capabilities (Up to four monsters on a screen!) and all the huge monsters you can wave a skyscraper at, but after the game is bought and paid for, you find that the only thing this game wreaks havoc on is your patience.

As far as the environments are concerned, there are landmarks to see in various levels, the Chrysler Building, the Sydney Opera House, Big Ben, the Imperial Palace, ect., but as far as being interactive, this may be debatable.

Sure the environs are interactive, but we could also say that the environments of Super Mario Bros. 2 were interactive just because we are able to pull turnips out of the ground.

Truth be told, this game’s environment is about as interactive as Rampage on the NES, and not nearly as fun.

Differences between these two games are easily noticed. In Unleashed you are playing with more graphic detail on an open plane, you can pick up a few buildings and launch them at foes, huge crystals are scattered all around, and when you die you don’t turn into a little naked person that shimmies across the screen.

However, for the most part, the army fires missiles and bullets at you for destroying buildings, and all the while other monsters on the screen try to beat you down for some reason or another.

Also, players are just stepping on areas that change to rubble without much effect and knocking down buildings, each of which fall down in much the same fashion as those in Rampage.

The selection between fighters is pretty extensive, ranging 26 different Kaiju to choose from, but why one might play as one of these characters is simply confusing, since all their moves get very repetitive after a few minutes.

And then comes what should be the most redeeming factor of this whole game: the story.

My guess is that Godzilla: Unleashed was made specifically for the fans of this series/genre.

The story, as simple as it may be, is pretty specific in its character listings, giving no clues as to what or who the main characters are, be it through a background lists, bios, or even subtle references in the story breaks. So, most likely, I’m assuming that the people playing this game are well into the world that the Godzilla creators have constructed.

For those of us who only know Godzilla on sight, and who have vague understandings of what Mothra is, this game will totally leave us in the dark. What’s more, Unleashed doesn’t play well enough for us to want to break through that ignorance and discover more about the Godzilla world.

So here ends the review with three different scenarios:

If you’re a fan of the series, then you probably already have this title; if you’re new to the whole Godzilla storyline, do some extensive Wikipedia research on each character and monster, then pick up Godzilla: Save the World, play it and beat it, and then, after all that’s finished, go pick yourself up a copy of Godzilla: Unleashed; and lastly, if you have no interest in the game or the back story or wasting the precious hours of your life, just keep on walking, bub.

You’re not missing out on anything.

Godzilla: Unleashed earns three out of five GiN Gems. The game is mildly amusing, but only really awesome if you happen to be a true fan.