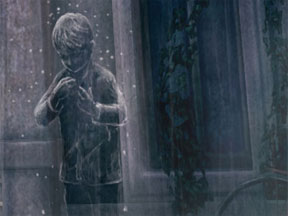 Rain plays like a children’s picture book, which isn’t a bad thing. It’s a haunting, emotional journey into’a world of childhood anxiety and melancholy. From the first two notes of Claude Debussy’s ‘Clair de Lune,’ the mood is set. Rain is the story of a boy who sees the incorporeal figure of a girl run past his window while he is spending a feverish night in bed. The girl is pursued by a giant, stalking figure and he follows them both into a world of moonlight and perpetual rain.

Once in the rain world, the boy also becomes a ghostly figure and can only be seen in the rain. Once the boy steps beneath an awning or bridge, he becomes invisible. Luckily, discarded bottles and newspapers kicked up by the boy’s feet serve to indicate to the player where he is, as well as his wet footprints. For the first third of the game, the boy is trying to reach the girl, as she runs through the city, pursued by the nightmarish figure, ‘Unknown.’

The setting is a blend of pre-war Paris, Vienna and Milan, all rendered in a slate blue palate. The boy runs down cobbled streets and under stone bridges, lit by gas-powered street lamps and past posters for the circus and philosophical statements. Invisible monsters roam through the city, but fortunately the rain reveals their shape. The boy must use handily placed awnings and doorways to get out of the rain and sneak past the creatures unseen. However, some puddles are muddy, which makes him visible, until he steps in a clean puddle again. The creatures are also attracted by noise, so running through a puddle will attract them, allowing them to attack and sending you back to the last check point.

Rain is a mood piece, rather than a test of gaming skill. There is little in the way of challenge, so anyone wanting to test their mettle should look elsewhere. The puzzles largely consist of exercises in stealth to sneak past the monsters. The boy can also push and pull various items to block the creatures in or create new paths for himself and the girl. Along the way, he gets to interact with music boxes and pulleys to distract creatures. He can also pick up soft toys and use them to lure creatures, but this is the extent of the interaction with the world. Rain’s simplicity is refreshing, but the story fails to create the balance needed for this minimalist approach to gameplay.

For the first third of the game, the boy is trying to reach the girl, who is unaware that he is even there. She is often glimpsed running over a bridge a street away or cowering in a doorway the boy can’t reach. And always being terrorized by the Unknown. At one point the boy saves the girl, but as he is out of the rain, she doesn’t even realize it and walks away. The boy calls after her, but he has no voice in the sunless city, which is a dark, mirror of the city he normally lives in. These tantalizing moments really do tug at your heart-strings, helped by the plaintive music.

Once the boy and girl find each other, the tension is reduced and the story becomes less successful. In gameplay terms, the two characters work together to navigate through the city and escape from the Unknown. Throughout the whole game, the gameplay possibilities are largely left unexplored. I never once found the muddy puddles a problem. I thought they would add a real layer of complication, but they could easily have not been there at all. The different settings were also underused. The circus got the best treatment, but even that was a fairly mundane affair. That said, the environments of a factory, ruined church, circus and the city itself could have been rich ground for puzzles and set pieces, but they all remained beautiful, but static backdrops that promised much but offered little.

The final act of the game, moved the setting from the pseudo-European city, to a Magritte-style surreal ‘city of the mind.’ The buildings became blank with gaping, dark doorways and stairways leading nowhere. At this point, the boy and girl are trying to reach a house, whose light they can see across the city. The tension mounts, but there’s no big pay off.

The game sets up this mysterious world of dreams and darkness. Why is the girl trapped there and how will they both escape? What are these creatures and why are they chasing these children? Some of these questions are answered, but it all feels like the writers never worked out the answers, so they just fudged the ending. There’s no great resolution or thought provoking twist in the tale. For a game that tries so hard to present itself as something for the thoughtful gamer, it fails to leave you thinking much at all.

Don’t get me wrong, I did enjoy Rain and would recommend it to people. It is very successful in creating a sense of isolation, the child’s fear of the dark and loneliness. At night, the monsters come out and chase you through your dreams – that’s the basic setting for Rain and it works. Add to that the brilliant choice of Debussy as the plaintive theme music and you’re on to a winner.

The animation of the girl and boy is lovely. Sometimes they put their hand out into the rain and look up, silently wishing it to stop. And sometimes the little girl coughs, her body heaving, making you think it’s all going to end in Dickensian tragedy. In addition, the creatures are ghostly and ghastly. Some are long-nosed, dog-like monsters, whilst the unknown is a huge, stalking creature with long, probing fingers. All these elements create an intriguing world, which pulls you through the game, in a bid to know more.

As the story plays out, each scene is accompanied by a storybook style line of text, which fades in and out of the scene. I love the use of text. Each line sits within the background – it may be resting on a rooftop, or along a bridge and then the next line would follow the perspective of the scene before dissolving. It feels like the game moves through the pages of a book, which is a nice touch. However, the writing is clunky, at best. It only took me a few lines and several adverbs to realize that the team should have bought in some better writing talent. In skilled hands, the text could have really enhanced the story and pulled everything together. It was just another missed opportunity, in a game of missed opportunities.

Despite its shortcomings, I find it difficult to damn Rain completely. It has to be applauded for exploring a different aspect of gaming. The mood and atmosphere of Rain make it well worth a play. I loved the game world, the music and the tone. I also enjoyed the pared down gameplay. It’s refreshing to have just two buttons, no map and no sub menus. With nothing to kill and no weapon, the focus of Rain is the relationship with the girl and finding your way home and trying to wake up from the nightmare world. Unfortunately, the ending fails to deliver the emotional punch the rest of the game promises.

Rain follows in the footsteps of Journey and Limbo, two games with instantly iconic visual styles, supporting simple, yet engaging gameplay. It does so much, so well. It’s just a shame that it doesn’t make the most of the great setting and ideas to deliver a richer experience.