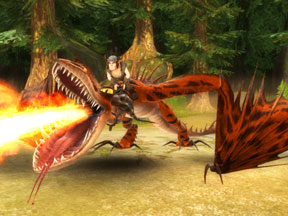 How To Train Your Dragon

The island of Berk is your typical Viking community where daily activities include wrestling chickens and sheep, busting barrels, toppling rocks, and of course fighting dragons. Like the title states, you will learn how to train your dragon.

The story opens up with the first annual Thor’s Day Thursday dragon celebration tournament where one Viking will be crowned the ultimate Dragon Master!

You have the choice to play the story mode as either Hiccup or Astrid, but there are more playable characters in arcade mode. You start off with your first dragon and over time have the ability to obtain more, but you can only own a total of four.

Your dragons stay in the dragon’s den unless they are battling. The den is where you can customize your dragon’s appearance. You will also feed your dragon with vegetables, minerals, herbs, and other collected materials to replenish bars for food, heal, mood, trust, and rest.

This is where How to Train your Dragon gives you a bit of RPG style attributes. Earned points can be used to level your strength, speed, stamina, power and fire of each dragon.

You of course have to train your dragon before entering a tournament. This is done in the training arena. You go through several trials against an opponent, who does not really fight back, which I found strange.

There’s tutorial, melee, and fire to level up but this was rather boring.

You’re given a move/combo to perform and I experienced problems with the combo timing. Button presses seemed not to register immediately. The repetitiveness of this exercise can lead to boredom, aggravation, and even sleep.

To say it slows down the game play is an understatement. To break up the monotony, you will want to travel to the challenge cave where your dragons can participate in mini-games where you can earn experience, items, and cash.

Arcade mode allows you to fight opponents and make custom dragons without worrying about the story line, which was actually pretty basic in story mode.

The custom dragons can be saved and loaded onto a memory unit so you can take your dragons to a friend’s house to compare and fight, using the import dragon option.

The graphics are very smooth with few glitches. I had no problems with collision detection or spontaneous levitation. I would recommend this as a definite buy for a young child that enjoys a fighting game and loved the DreamWorks film this game is based on. It was nice to see another movie based game that didn’t fall flat.