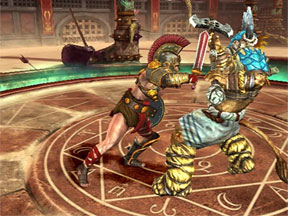 I’ll be the first to admit that fighting games aren’t my usual cup of tea. I’m generally not gifted when it comes to the twitch reflexes and intricate input commands that are so crucial in the one-on-one fighting genre. But even though I don’t typically invest my time in these games, I still know a good fighter from a bad one. When it comes to standing up against other fighting games, Tournament of Legends gets knocked out pretty quickly.

One of the major problems Tournament of Legends faces is the Wii itself. No matter how many times developers try and master it, the Wii’s control scheme just doesn’t seem to have the necessary precision to input commands consistently. While that issue can be an annoyance in other game genres, in the world of one-on-one fighters, it can render a game unplayable.

To compensate for the difficult command entry, the developers left the controls fairly basic. But this created its own problem by taking away some of the strategy during fights, which I discovered through playing the game with my younger brother.

While I took my turn battling the computer, I attempted to block, evade and use hard-hitting attacks when the opportunity presented itself. My younger brother, on the other hand, flailed his arms like an octopus trapped in a whirlpool. To my dismay (and utter disbelief), his method actually proved to be as effective, if not more, than mine…

But the reason it was so effective wasn’t just down to a lack of challenge in the A.I. It became increasingly evident that my style of play wasn’t as effective because the game wasn’t picking up on all of my arm swings and attack commands. And although I’m certain it wasn’t getting all of my brother’s, he was swinging his arms so fast that one missed command here or there didn’t have any impact on him.

Beyond the flawed gameplay, Tournament of Legends has a slew of other problems holding it down. One characteristic that hurts it is presentation. Generally speaking, the game feels generic, like a bunch of old ideas were just gathered and put together paper mache-style. There’s the giant robot with two hammers, the Minotaur with a giant sledge hammer and a Grim Reaper clone just to a name a few. And for the most part, they all feel the same, requiring the same, monotonous arm-swinging.

Level design is repetitive as well. Sure, the levels may look different, but it seems as though the developers used a single template for the entire game. Players square off, fight for a little while, and then have to make a motion on screen to avoid some kind of obstacle or threat from the level, such as a sea monster’s tentacle crashing down.

Tournament of Legends’ animation style isn’t great either. Generally, there isn’t anything that’s too fancy or spectacular. Character designs feature some neat concepts, but movement animations don’t seem to match up with the amount of physical exertion required to pull them off.

Sound seems like a bit of an afterthought too. It’s there, but it doesn’t really stand out or enhance the game.

Overall, Tournament of Legends didn’t feel like it’s a full game. The developers touted it as a $30 game that provided a lot of value for the money, but difficult commands inputs and a bland presentation make the game more frustrating than fun.

Tournament of Legends gets 2 GiN Gems out of 5.