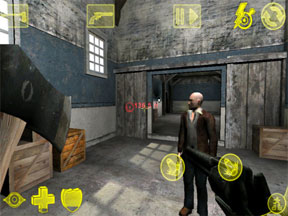 There are games that good for iOS and there are games that are not. Legendary Outlaws by Game Tongue Software sadly falls into the latter category. The game has promise, but it plays too much like a work in progress to really be enjoyable.

One of the most interesting things about the game is that you play as Colt Kaufman, an unapologetic bad guy. Colt is all about Colt and little else. It’s kind of refreshing to play a game where the main character makes no apologies or excuses for being a massive jerk. Unfortunately, that’s not enough to save Legendary Outlaw.

Graphically, the game looks like a rough cut. This is particularly obvious when playing on an iPad. Games like Shadowgun have taught me that I can have great rendering graphics on my iPad, so now I expect them.

Legendary Outlaw looks like someone took a video of some old footage from The Sims.

The soundtrack is pretty good actually. It’s got that old western movie feel to it and the music swells when the action gets going. Unfortunately, a good soundtrack is marred by hokey "country" dialog and bleeped out expletives. If you want to make a game with expletives, make it, but don’t bleep them out to adhere to the App Store’s policy. If you want your game in the App Store, come up with something besides expletives in your dialog. All that bleeping gets really tedious, almost as tedious as the "hick" accents.

The biggest problem with Legendary Outlaws, though, is the game-play. It’s too clunky. The camera view controlled by the right hand is too sensitive and movement controlled by the left hand is not sensitive enough. The whole experience is jerky and unpleasant like turbulence on a plane.

The combat system is mysterious. I’ve never played a game where a headshot from a handgun at close range didn’t immediately kill a man that wasn’t wearing body armor and didn’t have any kind of science fiction "enhancements." It’s supposed to be the old West. If I shoot a guy between the eyes, he should fall down and not get back up.

I’ve played a lot of games and I often play games that have excellent game mechanics, but get boring from lack of story. Then there are games like Legendary Outlaw that has an interesting plot but terrible game mechanics. I sometimes want to introduce these two groups to each other, like online dating for game designers.