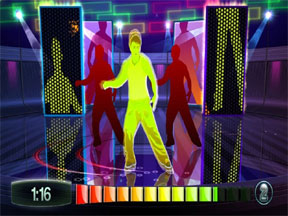 In the 1990’s, "Beto" Perez, created a fitness program and called it "Zumba." He never imagined that it would catch on worldwide and gather the following that it enjoys today. Zumba is contagious and highly addictive. The inspiration came from the traditional Salsa, Samba, Cumbia and Merengue music he loved growing up in Columbia. He mixed this love for music with traditional dance steps and the addition of a few new ones to create what many now love.

I became a fan at my first Zumba class at the local YMCA, but many people do not go to classes because they are afraid of possibly embarrassing themselves. The creation of Zumba Fitness the video game is the perfect solution for those individuals. The game is very easy to follow and includes a section aptly called "Learn the Steps." This breaks down the common steps you will find in many Zumba routines, so you will learn the moves needed to properly complete the dances.

The game is available for the Wii, PS3 and the Xbox 360. On the Wii it works with the controllers and on the PS3 it works best with the PS Move. I tested this game with an Xbox 360 and the Kinect product, which is probably the best of the three methods since the game console is literally looking at your entire body while you play and making sure you do things correctly.

When playing, I found many of the routines and songs I knew from classes, and some dances I was familiar with but to a different song. The workout you will experience will be the same on the game as in a class. I recently started back to college to finally obtain the degree that life and multiple sclerosis sidetracked me from. I was unable to attend Zumba classes, but this game fed my addiction and in a very good way.

Okay, lets get down to business. I started this adventure weighing 157 pounds, and after a little over 60 days, I am now a trim 142 pounds and still dropping. I was unable to play the game at a regular interval, and during midterms and finals; I did not even attempt to play it. I did try to at least get it worked in once a week, even if it was just one to three selected routines. The ability to select certain routines is a feature I found refreshing. You can also select a workout routine based on difficulty level and length of time.

The game includes 30 routines and some are exclusive to the routine, but I have found some instructors picking up these to use in their classes. You will be instructed on screen by Beto Perez , Tanya Beardsley and Gina Grant. I did meet the crew last year at an event held here in Huntington, WV. I highly suggest that anyone who is able should see them in person. The energy level is through the roof and all experience levels are present. This also goes for actual Zumba classes, and the game has a class locator finder which is a nice touch.

There were a few things I discovered in the game that I did not love. The graphics are glazed over and the side screens that mirror your moves are lack luster. The moves are easily distinguished, but the recognition software was not accurate when the game first came out. Now an update will load first and correct this problem. The other thing I kept looking for was downloadable content; none exist at this time, but I do hope to see some new dance routines in the future.

The audio is perfect and you will find yourself cranking up the volume and breaking a sweat. Do make sure to have water close by at all times when exercising as this game packs a stellar workout that does not feel like a workout in the mind, but does in the body.

The game is a great value and has definite replay value. If you get bored with the songs, then you can do what I do. I find a different piece of music and play it over the muted audio of the game. This is a way to mix it up and keep everything new, well until they finally release some DLC.

My final complaint is with any motion sensor game out so far. I was born with a disability where my right arm does not straighten out, nor can it extend over my head. I would love to see a way for me to program my system or set my games to recognize this. I am sick and tired of hearing my games tell me repeatedly to stretch my right arm out further. Trust me, I would love to! Thankfully, Zumba did not do this to me. Instead, it allowed me to focus on the music and the moves and have fun. This all made playing this fitness game a pleasure instead of a chore. The weight loss was a definite bonus.

Now, I need to buy new jeans, and when was the last time a game made anyone do that (for a smaller size anyway)?

Zumba Fitness earns 4 Â½ GiN Gems. It’s a must have for any gamer interested in staying fit.