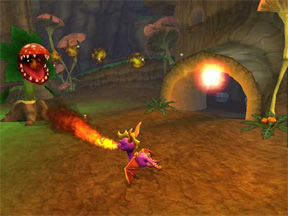 As the world turns and the gaming industry moves forward it’s almost inevitable that some game series’ are going to be left behind. What may have worked five years ago might not work today, and without revisiting the well of innovation many gaming franchises have been left to wither away.

We’ve all ready seen this happen with the Crash Bandicoot and Tomb Raider games, two franchises that were once very powerful on the PSX. Sadly, this process seems to be repeating when it comes to the Spyro games.

Spyro’s debut and follow-ups were big back in the late 90’s, as PSX owners were thrilled to get some solid 3D paltforming action that N64 owners were getting through Mario 64.

In this day in age though Spyro seems dated, and little has been done to update the series. Insomniac has abandoned the character, and in A Hero’s Tail it seems like VU Games is just trying to squeeze out the last few drops left in their cash cow.

Platforming titles have never been well known for their storylines and A Hero’s Tail makes no change to that. The game centers on Red Dragon, whose evil ways resulted in him being ostracized by the Dragon Elders. In retaliation Red Dragon has rounded up an army and littered the world with dark gems. As Spyro you must rid the world of the dark gems and Red Dragon.

The focus in Spyro’s gameplay has really shifted to exploration. Most of the quests you embark on in the game are of collection fare. To progress in the game you won’t be able to merely get most of the collectibles, you must get all of them. This makes it so that you’ll spend a lot of the game backtracking and wandering around, which quickly grows both boring and frustrating. A Hero’s Tail simply doesn’t have interesting enough worlds to warrant such gameplay design, and the game’s weak map system certainly doesn’t help matters. A lot of the areas that were created with platformer obstacles are poorly constructed, making some of the jumps you need to make unclear and difficult to perform.

The combat system in Spyro hasn’t changed much. You still match types of breath attacks that Spyro can muster to the types of enemies. The system was interesting back in the day but now it feels pretty stagnant, and really fails to hold interest. Sadly, it seems like a lot of the enemies were just tacked on out of necessity, as very few of them are seem to have any imagination put in them.

The mediocrity of the combat system reaches a crescendo when you come to the game’s boss battles. None of them really seem like anything different, and they all play quite alike.

The boss makes an attack and then spends several seconds catching their breath, where their weak spot is then revealed. If exploiting this pattern is difficult for you never fear, because the game saves every time you deplete a third of the boss’s health bar. Should you die you’ll come back with a full health bar. This process renders the boss battles nothing more than an intermission between exploration bits.

In an attempt to shake things up a little VU Games has thrown in a large list of characters that are allies of Spyro that you can play as well in certain places. Unfortunately, these sections are just as flawed as the sections you play as Spyro. The minigames that accompany each of these characters seem like an afterthought, and none of them are really fun to play around with.

Where Spyro has made some improvements is within the categories of audio of and graphics. While Enter The Dragon looked like a child’s finger painting A Hero’s Tail is quite competent visually. The game sports bright colors that bring up memories of children’s books, which is perfect given the game’s audience.

The voice acting this time around is much better too, as the voice actors sound comfortable in their roles and perform decently.

It’s truly sad to watch the Spyro series head off like this, knowing that years ago the cute lil’ guy set standards within genre. VU Games hasn’t made any effort to bring the games into the next-generation though, sticking with the same formulas that the games used back in 1998. Let’s all hope that Spyro makes a comeback next time another installment is put out, and VU Games doesn’t leave gamers everywhere serenading another dead horse.