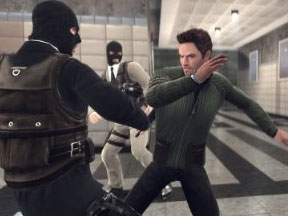 Released Separate From The DVD, Game Is Slightly Lacking

Why The Bourne Conspiracy didn’t come out in conjunction with the DVD release of the final Bourne film is beyond my comprehension, but whether we like it or not, the title has now infiltrated our PS3 and Xbox 360 consoles and provided a mediocre experience at best, despite having some pretty cool elements mixed in.

The Bourne Conspiracy follows the movements of the first Bourne film, The Bourne Identity. The game often has you playing scenes directly from the film, but primarily it adds to the movie’s plot by showing what happened during off-camera scenarios.

For those who don’t know (and if you are one of these people, go rent a film, will ya?), government assassin Jason Bourne goes after a mark and, just before he completes his mission, he’s suddenly overcome with an overwhelming sense of compassion when he finds the target’s children in the kill room. Here Bourne aborts the mission, only to be shot in the back and left to drift at sea. Picked up by a passing boat, Bourne finds himself stricken with a nasty case of amnesia. The rest of the game is made of flashbacks and short segments that allow Bourne to reclaim his identity.

In standard gameplay, with repetitive fighting maneuvers, button mashing becomes an old standard. Even the inclusion of a "takedown" feature does little to increase the in-game fighting and shooting, though the use of the surrounding environment is somewhat surprising at times.

Truth be told, this game’s fighting gave me PTSD flashbacks of playing the Fight Club game of 2004. There’s no great imaginative feats performed here, just a series of motions that get you from Point A to Point B. A lot has been made of the fact that the character in the game was supposed to have realistic combat moves just like Bourne from the movie, but if controlling those moves is too difficult or even too simplistic, it kind of gets lost in the haze of repetitive gameplay. You just don’t quite feel like you are really using all those great moves and practicing a martial art.

There is also a driving portion to the game, but with unrealistic controls, it should have been nixed before the game started hitting store shelves.

As stated before, the visuals of the game definitely steal the trophy for being the best part of this title, but though the graphics are fantastic, without the gameplay to help them along, The Bourne Conspiracy becomes just another pretty game with nothing going on upstairs.

On the downside of the visuals, character templates tend to get a little repetitive and the motions of the pedestrians are played on a track that can’t be interfered with, which gives the game a very stilted, non-interactive feel.

The unlockables and accomplishments are made interesting only because they are so easy to attain. With no real challenge, and no real payoff to speak of, the only thing this game is good for is making you want to reclaim the cash spent on it, and to watch the films again, which may have been their main target to begin with.

If so, mission accomplished!

Sadly, a gamer could see some real potential in The Bourne Conspiracy. The feel of the game suggests a great amount of work went into the details. An FPS enthusiast could glimpse even more latent talents buried in this game, but on the whole, all this hard work still leaves us wanting more.

Because of that, unless you’re a hardcore Bourne fan, I say pass and go play another round of MGS4 to see what a real game is supposed to look like.