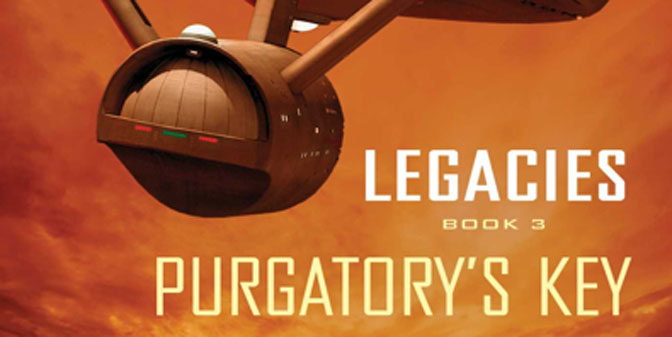 As a tie-in to celebrate the fiftieth anniversary of Star Trek: The Original Series, Simon and Schuster released a new trilogy by four different authors. The third book, Purgatory’s Key, is by Dayton Ward and Kevin Dilmore, veteran Star Trek writers, who conclude the complex trilogy started by Greg Cox and then continued by David Mack.

The story in the third and final book must weave together all the various plotlines from the previous two books. This is a daunting challenge for any writer, but to follow on the heels of two other writers must be particularly difficult. Nonetheless, Ward and Dilmore manage to wrap up the series that takes place in two different universes, over several decades, among the Federation, the Klingons, a primitive race called the Usildor, and the other-dimensional invaders, the Jatohr. 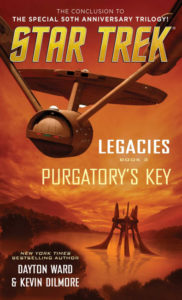 Ward and Dilmore do a nice job of finishing out the story and not leaving any unresolved issues for the main characters. I particularly appreciated that they took the time to give each character his or her due, including the Klingons and Jatohr. The poor Usildor are perhaps left out somewhat, but that’s also the nature of their story. Throughout the entire trilogy the Usildor have largely been pawns in a very complex chess set.

One issue I had with the book was the excess of techno-babble that didn’t exist in the previous two novels of the trilogy. I appreciate the need to reverse the polarity of the EPS conduits as much as the next science fiction reader, but Ward and Dilmore over explain the pseudo-science to the point that I found myself skimming. I’m not the kind of reader who skims regularly, so it’s never a good sign when I find myself doing it. Cox and Mack were both able to give the flavor of science and space and multiple universes without letting it bog down the story. Ward and Dilmore don’t seem that masterful at balancing the need to create a believable sci-fi setting  against putting in too much detail. It’s tough to pull off in this kind of science fiction, and they don’t quite manage it.

On the other hand, they do well with the characters and the plot so that the end is still satisfying and the reader doesn’t feel abandoned, which is the most important thing. Ultimately the Star Trek: Legacies trilogy is worth reading. It’s a complex story with a lot of human interest and a lot of action. All the characters you love from the original series are there and doing what they do best. Fans will love it. If you’re new to Star Trek and have only seen the most recent reboot movies, you’ll probably want to watch the couple of episodes (referenced in the books) of the original series to get up to speed. Read it for yourself and let us know what you think in the comments below.