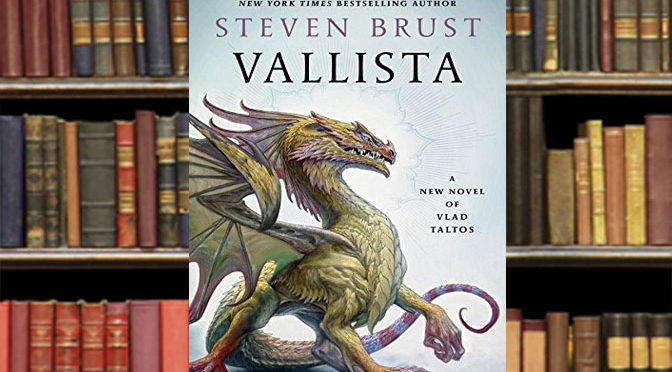 Vallista: A Novel of Vlad Taltos

Hey all I’m back with a new series for my review this week. It’s Vallista, Book 15 in the Vlad Taltos series!

Plot Synopsis: Vlad Taltos is an Easterner―an underprivileged human in an Empire of tall, powerful, long-lived Dragaerans. He made a career for himself in House Jhereg, the Dragaeran clan in charge of the Empire’s organized crime. But the day came when the Jhereg wanted Vlad dead, and he’s been on the run ever since. He has plenty of friends among the Dragaeran highborn, including an undead wizard and a god or two. But as long as the Jhereg have a price on his head, Vlad’s life is…messy.

Meanwhile, for years, Vlad’s path has been repeatedly crossed by Devera, a small Dragaeran girl of indeterminate powers who turns up at the oddest moments in his life. 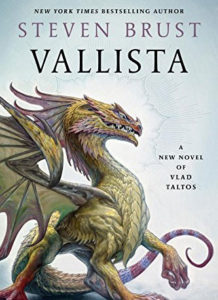 Now Devera has appeared again―to lead Vlad into a mysterious, seemingly empty manor overlooking the Great Sea. Inside this structure are corridors that double back on themselves, rooms that look out over other worlds, and―just maybe―answers to some of Vlad’s long-asked questions about his world and his place in it. If only Devera can be persuaded to stop disappearing in the middle of his conversations with her…

[amazon asin=0765324458&text=Fans of the series should certainly enjoy Vlad’s adventures in Vallista with a copy from Amazon!]

Plot: I want to say I was really impressed with this book, however I really can’t say that I understood most of what was going on. This is most likely due to the fact that this is the first book in the series I’ve read. Vallista, being the fifteenth in the series, has left most of the explanatory elements long behind in past entries, leaving me with no clue as to who I should care about. There are twists and turns in plot that I might be completely missing due to my lack of knowledge on the series in general. Normally for a series I hadn’t gotten into I’d read the entire thing, but I didn’t realize that was the case until about halfway through the book. So, I’ll say I enjoyed the action, but most of the actual plot progression that occurred was completely over my head.

Characters: Vlad is a pretty decent main character, but having jumped into the series with the fifteenth book I can’t say I found him as engaging as other characters I’ve read like Vin from Mistborn. Devera on the other hand seems to be a little girl, although I’m pretty sure there’s something in her nature that points at a deific origin. I couldn’t really get to a good understanding of her, but again this is due to me lacking information on the series in general.

Overall: For fans of the series, this should be an excellent entry, but if you are a newcomer like me, stay away from it. It’s okay, but it most definitely isn’t a stand-alone title.

For those who like: Fantasy, Long Series, Action, Mystery