Hey all I’m back with the sequel to a book I reviewed quite a few months back! It’s Child of Sorrow, Book 02 of The Sword Chronicles by Michaelbrent Collings!

Plot Synopsis: Sword thought it was over. She thought that when she killed the Chancellor and ended the corrupt reign of the Emperor, that everything would get better. That the suffering would end in Ansborn. That the people would be free. But now a new terror has been born. A trio of warriors who live only for vengeance, who know only hate, have set their sights on Sword and on those she holds dear. They are powerful, they are deadly, and they are impossible to kill. And worst of all, they are but harbingers of what is to come. 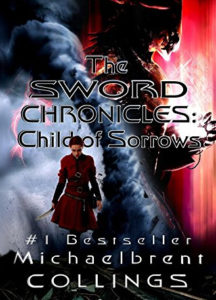 Because after a thousand years, the unknown enemy that lies below the mountains of Ansborn is at last on the move. And it is coming for them all. Death from among them. Death from below. And only one person – one Sword – has any chance of stopping it.

[amazon asin=1534832300&text=Jump into the excellent The Sword Chronicles series with Child of Sorrow!]

Plot: The plot of this entry is just as intense and action packed as the first book. That isn’t to say there aren’t restive moments, but they come few and far between what is otherwise a nonstop series of action sequences. I’m still of the opinion that I Mr. Collings writes some of the more depressing books I’ve ever read, but that isn’t to say they are bad, it’s just not something one with depression and anxiety issues should probably be reading this time of year. Thankfully I read it prior to last week’s US Presidential Election, although I’m writing this review after it occurred.

Characters: The characters we got introduced to in the last book all come back, well the ones that are still alive that is. Frankly the amount of death that occurred by the end of the first book was so depressing that I really regret reading this sequel in the middle of Autumn. Again it’s nothing against the book, just something that people with mental health issues should take note of. As for the cast of characters they are great, and I really liked Cloud (No, not the emo mute from Final Fantasy).

Overall: This is a great sequel, but those with mental health issues may want to wait until the days are longer again before reading it.