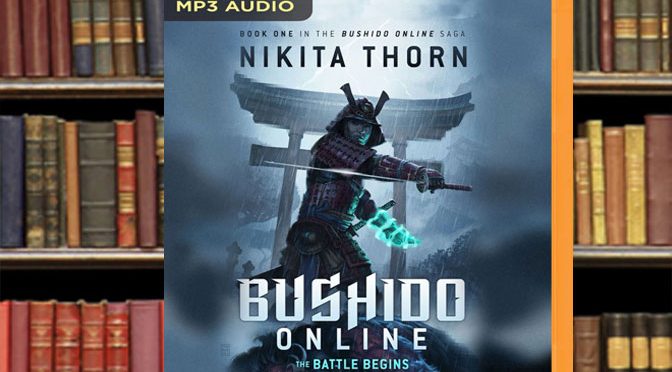 Hey all I’m back with another audiobook from the good folks at Audible. It’s The Battle Begins, Book 01 of the Bushido Online series, by Nikita Thorn!

Plot Synopsis: Seth Kinnaman’s dream has always been to become the best fighter the world has ever seen. After spending his entire life training, he’s finally ready to test his skills in the biggest tournament on Earth, where hundreds of the fiercest competitors vie for the supreme title. In the semifinals, Seth is getting the upper hand when his opponent uses an illegal blow to take him out. Upon waking up from a coma, Seth finds out he’s lost his sight. He’s become blind, and he’s completely devastated. All his dreams are now shattered, and he soon falls into depression. What is he going to do with his life? That’s when he’s introduced to Bushido Online, a game that promises to keep his skills sharp while he figures out what his next move is going to be. 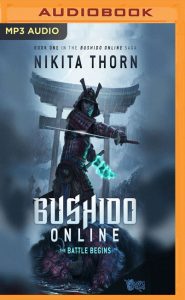 Plot: The plot of this is very good, I was half expecting it to be full of cringe worthy Japanese cultural nuances that would probably be lost on many people, but thankfully this LitRPG doesn’t have too many of those. There are a couple, but mostly it’s there and gone again before you can really start to even flinch. Now as for the actual plot of this book, I was rather impressed. It hit some really amazing points, and honestly, I even teared up at a couple times. The story isn’t happy go lucky, because Seth is dealing with a very severe depression, one I personally know all too well. So I could relate, and even appreciate what Seth goes through.

[amazon asin=1978631480&text=Log into Bushido Online with a copy of the audiobook from Amazon!]

Characters: The entire cast is great, but Seth is the star of the show. That being said, my favorite character is probably Master Tsujihara, mostly because Seth can be a bit of a dumbass sometimes. Though given, he admits he is no gamer, so I’m not that torn up when he makes some really rookie mistakes.

Voicework: Christian Rummel is our narrator and for the most part he does an admirable job with all the Japanese names. There are a few glaring mistakes however that pop up, like a certain character most likely named Kage, but pronounced as “Cage” instead of the correct “Ka-ge” of the Japanese language. Hopefully in future entries in the series Mr. Rummel will shore up his knowledge of Japanese phonetics, because he did an amazing job otherwise except for those few name mispronunciations.

Overall: This is a really solid book and an awesome LitRPG that any gamer will love. Fans of Japanese culture will also enjoy it quite a bit.

For those who like: LitRPGs, Gaming, Martial Arts, Awesome Plot, Fantastic Cast of Characters, Good Voicework.