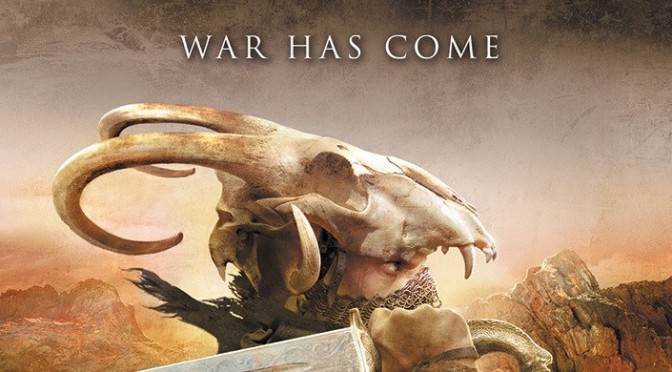 Hi everyone I’m starting up a new series for reviews and I’ve just finished listening to the first book. It’s time to hit the smithy with The Seven Forges, Book 01 of the Seven Forges series, by James A. Moore!

Plot Synopsis: The Seven Forges are a range of impassable mountains, far to the north of the settled lands of Fellein. From time to time explorers venture up beyond the Blasted Lands in search of a way over them and the promise of legendary riches, but without success. Now Captain Merros Dulver has found a path, and 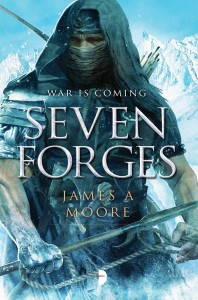 encountered, at last, the half-forgotten people who dwell there. And it would appear they were expecting him.

Plot: As interesting a plot hook as the above synopsis is, it quickly turns into a series of talking heads with a few battle scenes in between. That may serve this series as a whole well by setting up the foundation of a long lasting series, but it doesn’t make for a great first book. Yes there is lots of action and I’m sure things that we touch over in this first book get a lot more exploration in later books, but I’ve walked the range of Epic Fantasy from the over-rated Game of Thrones to the excellent Cosmere mega-series by Brandon Sanderson and just about everything in between.  This isn’t as bad as Game of Thrones in terms of gut punching, and it’s not as nearly thrilling and captivating as the Cosmere mega-series.  It’s mediocre, it plays the Games of Thrones card of brutality and does it well, but it does it in a way that is, to me at the least, very generic now.  This isn’t to say this book is bad, it’s not bad at all. It’s just not amazing.  Maybe after experiencing the rest of the books I’ll have a change of opinion, but I don’t think I will. My bar has been set pretty high by Brandon Sanderson’s masterworks and this doesn’t even come close to being as captivating as his worst work Elantris which was still spectacular.

Characters: Drask is probably my favorite character of the lot, but the entire cast is interesting. Broly, whose name makes the inner Anime nerd in me laugh uproariously, is my least favorite because he’s a foppish peacock like some of our Presidential hopefuls.

Voicework: David de Vries is the narrator for this book and he does an awesome job with the book given how generic it is. He’s not Michael Kramer, but he get’s the job done.

Overall: This is a generic Epic Fantasy series’ first book, if you can’t stand generic skip it.

For those who like: Epic Fantasy, Violence, Drama, Action, Politicking.