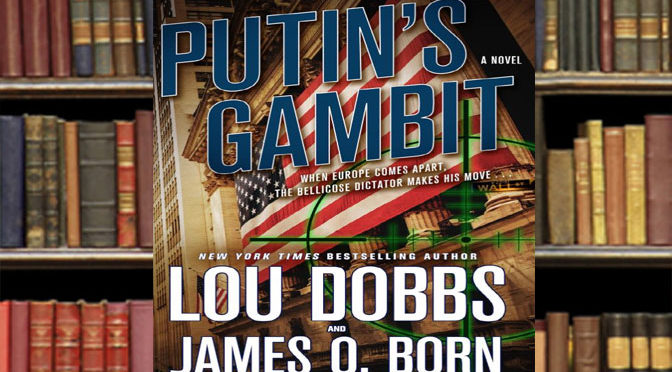 Hey all. I’m back with a Military Thriller that could pretty easily be a real headline, though hopefully it never will be. It’s Putin’s Gambit by Lou Dobbs and James O. Born!

Plot Synopsis: Adjusting to civilian life has not been easy for former Marine Derek Walsh. As he navigates a brutal job on Wall Street and a challenging romance, he wonders if he could be doing more with his life. When an inexplicable $200 million-dollar money transfer is made on his computer, he is thrust into the world of international terror, and the global economy is knocked off its hinges.

On the other side of the Atlantic, a dangerous alliance has formed. Radical Islamists and Russian extremists have set the wheels in motion for Russia to assert its power in Europe… 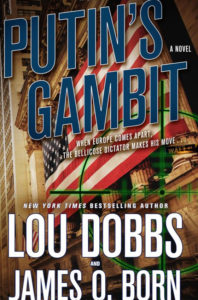 Plot: Like I said, the plot could easily read like a really horrifying newspaper article, albeit written in prose. Otherwise this is a pretty mediocre Military Thriller that attempts to meet the standards set by Tom Clancy or other authors in the genre. Frankly other than the eerily plausible plot, this book doesn’t have much going for it. There are Intense moments, but I found them to be lacking compared to plots by other authors like Clancy.

Characters: Walsh is a pretty standard main character for a Military Thriller, and the rest of the cast isn’t much better. That being said, I’m honestly not thrilled that there were actual political people involved in this story, and I feel like it’s trying to ride off the waves generated from the Trump-Russia investigation that is currently going on. The fact that this is co-written by a very famous TV Broadcaster doesn’t help that impression either.

Overall: If you want to read something that could very plausibly happen in reality, then Putin’s Gambit is right up your alley. If you aren’t that interested in Politics than it might not be the right book for you.

For those who like: Politics, Military Fiction, Military Thriller, Action, Drama.