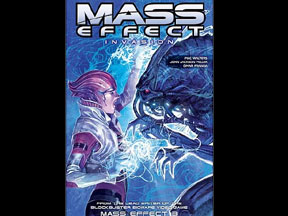 Dark Horse has collected all the Mass Effect comics into three neat graphic novels, each collecting issues one to four of their own story. As the Mass Effect game trilogy has come to an end, I’m going to review the books as a complete series, offering an overview of each story and how they tie in with the game.

Mass Effect: Redemption follows on from the end of the first game and fills in a bit of story before Mass Effect 2 kicks in. The Asari, Liara, is fighting Cerberus for possession of Shepard’s body. Everyone’s favourite captain is dead and Cerberus has ideas of its own, when it comes to letting the dead rest in peace.

The story is vaguely interesting, as we see the Mass Effect universe from a new perspective. Liara is joined by a mysterious Drell and they have to work together to battle against Cerberus. But my interest began to wane quite soon and only diehard Liara fans should bother.

The most interesting premise of the three, Evolutions offers fans of the game The Illusive Man’s origin story. Set before all three games, we meet mercenary, Jack Harper (who will become the Illusive Man), during the First Contact War. On Palaven, the Turian’s have discovered an artefact and when Jack and his team come into contact with it, they are changed in varying degrees, but changed forever.

I found Evolution, the most engaging, as we all want to know how The Illusive Man got to where he is in the games. However, I felt that we had to make a credibility leap from getting zapped by some relic to suddenly, hating everyone except humans and creating a pro-human organisation bent on conquer and destruction.

This is probably worth a punt for fans of the series, as it fills some interesting gaps and may even settle some of the ‘indoctrination’ questions ‘ or at least offer more lore to pore over.

When Cerberus’ experiments with Reaper technology go wrong, something is unleashed and emerges from the mass relay. It’s bad and its first stop is Omega. This comic is Aria’s story and explains her power struggle on Omega, as she tries to protect her turf from Cerberus and a new, bigger threat.

As cool a character as Aria is, I got totally bored reading this book. It started well, but the clunky writing and lack lustre story was just too much to bear. If you’re a glutton for punishment go for it. There are a few nice scenes, but the story drags and it feels like between game filler.

This book also includes a one-shot DLC offering some back story for James Vega and setting everything up for the start of Mass Effect 3.

Overall review: All the books are scripted by Mac Walters, lead writer for Mass Effect 2 and 3, but as good as the writing is on the games, his talents don’t transfer very well into the medium of comics. The dialogue was clunky and didn’t differentiate between alien races, let alone characters. All the attention to detail of the games seems to have gone out of the window. But the games take years and I’m sure the turnaround on these comics is pretty tight.

In the opening of Redemption, Liara lets rip with her powers, only for one of her foes to say, ‘she’s using biotics,’ just in case we didn’t get what the blue glow and flying bodies alluded to. His buddy then says, ‘get her’ or words to that effect. And new scenes often come with the caption ‘soon,’ when I think Walters meant ‘meanwhile.’ He obviously struggled with the form, which is a shame, when we gamers know he can write.

As for the artwork, it’s just okay. The panels make sense, so there’s no problem there and the character likenesses are good. I’d say the art is better than the writing, but it’s still very average.

From a comic book fan perspective, I wouldn’t be rushing out to buy other work by the artist, Omar Francia or the writer, Mac Walters. As a gamer, there’s probably enough to make these worth a purchase, but you’d have to be a serious Mass Effect fan. If I had to choose one, I’d say Evolution is the best. Origin stories are always good and this one does a fair job of answering those fan questions.