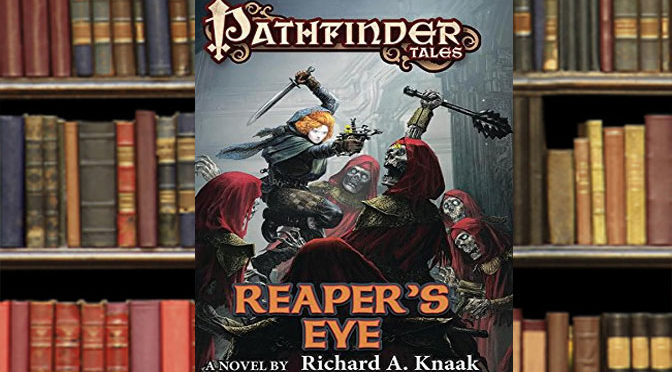 Hey all. I’m back with another novel from the Pathfinder Tales universe! It’s Reaper’s Eye by Richard A. Knaak!

This is actually the second review of Reaper’s Eye that GiN has published, though they both agree that this is one great novel. Check out our other book reviewer’s take on Pathfinder Tales: Reaper’s Eye.

Plot Synopsis: Daryus Gaunt used to be a crusader, before a questionable battlefield decision forced him to desert his unit. Pathfinder Shiera Tristane is an adventuring scholar obsessed with gaining the recognition she feels was stolen from her. When both are contacted by a sinister talking weasel and warned of a witch about to release a magical threat long trapped beneath an ancient temple, the two have no choice but to venture into the demon-haunted Worldwound in order to stop the disaster. Yet there’s more to the situation than either realizes, and neither fame nor redemption will matter unless they can first survive. 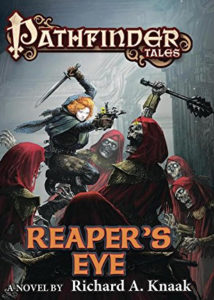 Plot: The plot is incredibly fast paced and draws you in quite well.  We also get our first introductions to the characters Daryus and Shiera, a pair that couldn’t be more different from each other. I found Reaper’s Eye to be an incredibly well written entry in the Pathfinder Tales universe and if you’ve enjoyed any sort of Fantasy ever, you’ll enjoy Reaper’s Eye.

Characters: Like I said above, Daryus and Shiera are two very different people, where Daryus prefers to get things done by force and has a strict moral code, Shiera plans things out meticulously and isn’t above using trickery to survive. I really enjoyed this pair of main characters, but the side characters we meet here also were pretty interesting. Toy is a weasel, and is also the weasel mentioned in the plot synopsis above. Grigor and Harricka are the other two named characters we get to meet that I enjoyed as well. Harricka was a very nice addition, I love seeing capable women characters who can take care of themselves, and Harricka fits that mold perfectly. Grigor is, for lack of a more eloquent phrase, crazy as hell. I enjoyed them both, but truthfully they were a bit overshadowed by Daryus and Shiera.

Overall: If you’ve ever enjoyed Fantasy, you’ll find Reaper’s Eye to be a wonderful read.