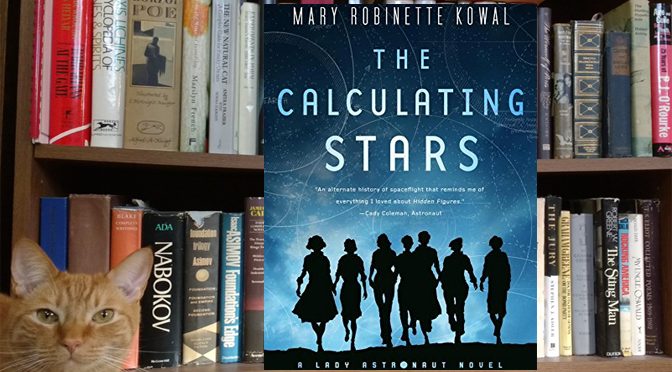 Hey all I’m back with another book from the good folks at Tor. It’s The Calculating Stars by Mary Robinette Kowal!

Plot Synopsis: On a cold spring night in 1952, a huge meteorite fell to earth and obliterated much of the east coast of the United States, including Washington D.C. The ensuing climate cataclysm will soon render the earth inhospitable for humanity, as the last such meteorite did for the dinosaurs. 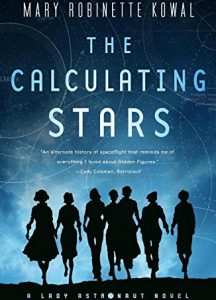 This looming threat calls for a radically accelerated effort to colonize space, and requires a much larger share of humanity to take part in the process. Elma York’s experience as a WASP pilot and mathematician earns her a place in the International Aerospace Coalition’s attempts to put man on the moon, as a calculator. But with so many skilled and experienced women pilots and scientists involved with the program, it doesn’t take long before Elma begins to wonder why they can’t go into space, too…

[amazon text=It’s not hard to calculate that you will probably enjoy reading The Calculating Stars. Get a copy from Amazon!&asin=0765378388]

Plot: This is an awesome book not least of all because Elma is one badass heroine. It deals with all sorts of social norms that persist to this day in one form or another. Honestly, I’m looking forward to the sequels this series hints at.

Characters: Like I said above Elma is one tough female lead that is the highlight of this book, but the rest of the cast is equally entertaining and engaging. That said Elma was my favorite.

Overall: If sci-fi thrillers with strong female leads is your preference, The Calculating Stars will be right up your alley.

For those who like: Sci-Fi, Thrillers, Alternate History, Strong Female Leads.

One thought on “Hidden Figures Meets Fantasy in The Calculating Stars”