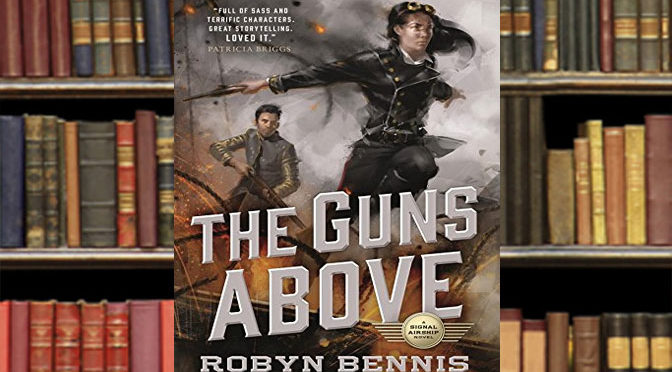 Hey all I’m back with another book review from Tor. It’s The Guns Above, Book 01 of the Signal Airship series, by Robyn Bennis!

Plot Synopsis: They say it’s not the fall that kills you. For Josette Dupre, the Corps’ first female airship captain, it might just be a bullet in the back. On top of patrolling the front lines, she must also contend with a crew who doubts her expertise, a new airship that is an untested deathtrap, and the foppish aristocrat Lord Bernat, a gambler and shameless flirt with the military know-how of a thimble…

Plot: The plot is pretty awesome, I picked it up expecting to need to keep myself reading the book, and I was surprised at how little effort that took. There is plenty of wit and charm, and even wonderful lines like the following. “We shot their governor!” “Wait, they were carrying politicians?” This was one of the more memorable lines, but in general I found this book to be full of sass, and humor. Which is good, because the actual plot of the book is decidedly serious, so having those moments where humor was present was a breath of fresh air. Even if said humor was very dark… 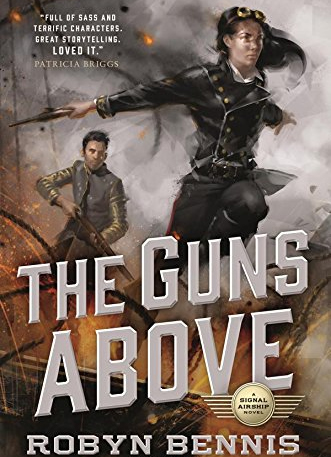 Characters: Josette is probably one of the more interesting female leads I’ve read in a while, and while I’ve read some other series that have much more spunk, I was still entertained by Josette and her crew. Bernat was also a blast to read, even if he’s a fop. The rest of the cast was also great, with my favorite side character being Jutes, who was quite fun.

[amazon text=Take off for high steampunk adventure with a copy of The Guns Above from Amazon!&asin=0765388766]

Overall: If you love Steampunk Fantasy, The Guns Above is going to be an absolute must read for you, if you enjoy fantasy in general, I’ll still recommend reading this. It may have its more serious moments, but it has enough humor to prevent it from becoming a depressing slog.