Hey all I’m back with the latest entry in the Heartstrikers series! It’s No Good Dragon Goes Unpunished by Rachel Aaron!

Plot Synopsis: When Julius overthrew his mother and took control of his clan, he thought he was doing right by everyone. But sharing power isn’t part of any proper dragon’s vocabulary, and with one seat still open on the new ruling Council, all of Heartstriker is ready to do whatever it takes to get their claws on it, including killing the Nice Dragon who got them into this mess in the first place. 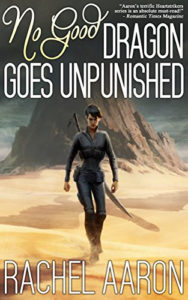 Plot: This entry is a weaker book compared to it’s predecessor, which is a real shame because that entry was excellent filled with plenty of action and just the right amount of dialogue. The main fault with this entry is that it’s not nearly as filled with action. That isn’t to say there aren’t action sequences, but that they’re overshadowed by dialogue. That isn’t to say that No Good Dragon isn’t a good book, but it’s not as good as the previous one. It definitely is leaps and bounds above crud like Twilight, but it falls short of stories like those written by Sanderson or Butcher.

Characters: I actually really dislike Julius in this entry, he plays the “Nice Dragon” a bit too much for my liking, although it does stay true to his character I found it more and more grating as the story went along. In contrast I found Marsi’s parts of the story to be excellent. But the real star of this book is Chelsea and I found that I really enjoy her as a character much more after this book. We didn’t get enough interactions with my previous favorite character Amelia as well. That being said my favorite newcomer is probably Raven, who I found to be quite amusing. The rest of the newcomers were alright, but nothing really special either.

Overall: An okay sequel to an amazing book, hopefully this proves to be a single time flop in a series I’ve got high hopes for.

You would think that having the nice dragon, Julius, take over control of his clan from his evil mother would be riveting, but book three of the Heartstrikers series is a bit of a downturn for the series. Still good, but we know it could be better.