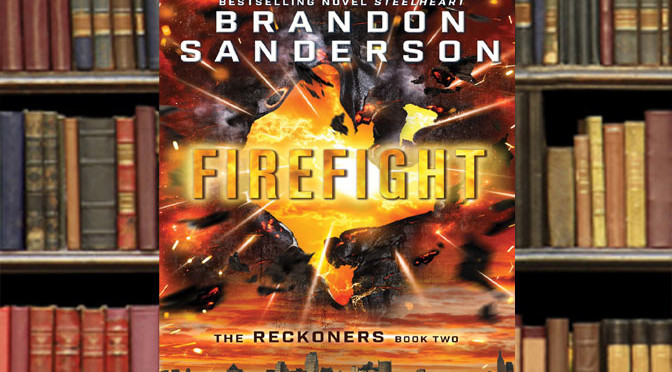 I recently received an email asking me to review the audiobook version of Firefight, Book 2 in The Reckoners Series, by Brandon Sanderson with a bit more in-depth review. Specifically, I will be covering the Audible Studios version. I’ve always enjoyed Brandon Sanderson’s work ever since listening to Mistborn: The Final Empire back in 2009. 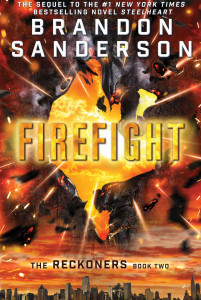 I have personally always preferred to listen to a book being read, however it’s not for the reason most people prefer, which is that the hands are free to do something else. I prefer it because I can enjoy the story for a longer period of time.

Macleod Andrews is the one who narrates the series and his work in both Steelheart, Book 1, and Firefight is the excellent quality that I would come to expect from the experts at Audible Studios.

Plot Synopsis: Newcago is free. They told David it was impossible, that even the Reckoners had never killed a High Epic. Yet Steelheart – invincible, immortal, unconquerable – is dead. And he died by David’s hand. Eliminating Steelheart was supposed to make life simpler. Instead, it only made David realize he has questions. Big ones. And no one in Newcago can give him answers.

Babylon Restored, the city formerly known as the borough of Manhattan, has possibilities. Ruled by the mysterious High Epic Regalia, Babylon Restored is flooded and miserable, but David is sure it’s the path that will lead him to what he needs to find. Entering a city oppressed by a High Epic despot is risky, but David’s willing to take the gamble. Because killing Steelheart left a hole in David’s heart. A hole where his thirst for vengeance once lived. Somehow, he filled that hole with another Epic – Firefight. And now he will go on a quest darker and even more dangerous than the fight against Steelheart to find her, and to get his answers.

Plot: The plot of Firefight is another notch in Brandon Sanderson’s belt marking him as one of the best authors in the world for his creative magic systems and excellent world building skills. The story delves deeper into the beginning of the Epics and their sources of power, as well as the past of both Prof and Megan’s lives as Epics. I particularly enjoyed the plot of the book as it’s rare for a young adult series to be enjoyable for adults, but like usual Brandon pulls it off with a bang.

Characters: The cast of the previous book are back, and while I enjoyed the interactions between them I particularly liked David and newcomer Mizzie’s interactions the most because Mizzie is probably one of the few people in the world of The Reckoners to be able to smile freely.  It’s a nice foil to David and his moodiness.

The Magic: The Reckoners is probably the least definable magic system that I’ve seen Brandon ever do, but the rules that we know in the series still manage to stick to his Three Rules of Magic. That being said the new Reckoner tech we learn about in this book, the Spiral? (Not having the book handy to check the spelling of things you hear is so much harder in English than it is in Japanese) is really quite interesting with it’s ability to allow the user to move around the city of Babylon Restored with ease, if not with much stealth.

Overall: If you enjoyed Steelheart and wanted more, then this sequel will satisfy your desire for everything up to the last page, and then leave you wanting even more.