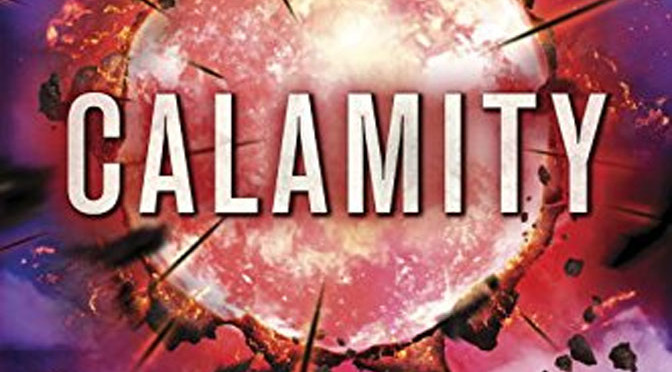 Hello everyone! I’m proud to say that I’m back with the epic conclusion to the series that got me working with Audible in the first place. It’s time to unveil Calamity, Book 03 of the Reckoners series, by Brandon Sanderson!

Plot Synopsis: When Calamity lit up the sky, the Epics were born. David’s fate has been tied to their villainy ever since that historic night. Steelheart killed his father. Firefight stole his heart. And now Regalia has turned his closest ally into a dangerous enemy. David knew Prof’s secret and kept it even when Prof struggled to control the effects of his Epic powers. But facing Obliteration in Babilar was too much. Once the Reckoners’ leader, Prof has now embraced his Epic destiny. 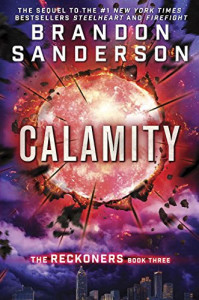 Plot: As frequent readers of my book reviews and my Wednesday columns will know, I love Brandon Sanderson’s works and Calamity is just one more proof that he is the preeminent Author in all of fiction. I’m not just saying that because I like him, it takes supreme skill to pull off some of the literary stunts he pulls in just the Reckoners. Now as for the actual plot it is wonderful, and a satisfying conclusion to his latest Young Adult series. That isn’t to say Calamity can’t be enjoyed by adults, because it is so amazingly well done that any well read adult will enjoy the hell out of it.

[amazon asin=0385743602&text=Start enjoying Calamity in audiobook or paperback from Amazon!]

Characters: We get to meet a few characters that have been hinted at since the beginning of the series, but overall the stars are David and Megan. David is a wonderful male lead and he spouts the absolutely worst metaphors you’ll ever hear. Megan on the other hand is his foil and I enjoy the hell out of her character as well, although I might be a bit biased since she’s from Portland. The rest of the cast is wonderful, with Cody being my favorite other than David and Megan, if only because he’s such a big liar that it’s hilariously funny to listen to.

Voicework: MacLeod Andrews does the voice work, like he did for the previous two books in the series, and I loved it. He pulled off each of the characters perfectly, and made the series absolutely enjoyable.

Overall: If you loved the prequels, you’ll absolutely love this epic conclusion.

For those who like: Amazing Plots, Fantastic Cast of Characters, Stupendous Voicework, Brandon Sanderson, To Read or Listen to an Audiobook.

Not for those who don’t like: Any of the above, but really you should give the series a listen to, it’s worth it.