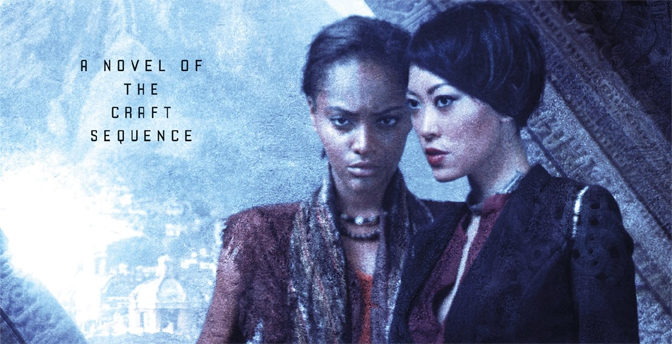 Hey all! I’m back with the fifth entry plotwise in the Craft Sequence series! It’s Full Fathom Five by Max Gladstone!

Plot Synopsis: On the island of Kavekana, Kai builds gods to order, then hands them to others to maintain. Her creations aren’t conscious and lack their own wills and voices, but they accept sacrifices, and protect their worshippers from other gods―perfect vehicles for Craftsmen and Craftswomen operating in the divinely controlled Old World. When Kai sees one of her creations dying and tries to save her, she’s grievously injured―then sidelined from the business entirely, her near-suicidal rescue attempt offered up as proof of her instability. But when Kai gets tired of hearing her boss, her coworkers, and her ex-boyfriend call her crazy, she starts digging into the reasons her creations die… 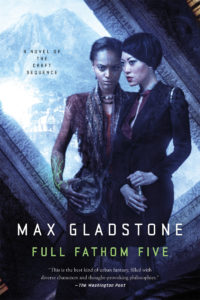 Plot: This is a new area of the Craft Sequence world that we get to experience in this latest novel, and while it holds similarities to Alt Coulumb and Dresidiel Lex it is definitely it’s own city. Personally while reading the book I was imagining a South Pacific island patrolled by Easter Island style giant statues. That was a pretty cool image to have in my mind while reading the book. The plot iself is amazing and probably one of the better entries, but not quite as thrilling as Four Roads Cross in terms of action. Full Fathom Five was a bit more focused on the intrigue side than Four Roads Cross’s focus on epic battle scenes taking place in a court room.

Jump into the Craft Series with a copy of Full Fathom Five from Amazon.

Characters: Like other entries in the Craft Sequence, Full Fathom Five has a few new faces mixed with familiar faces from previous books, including my personal favorite Elayne Kevarian. That being said my favorite newcomer from this entry is Issa a young girl who is a thief due to circumstance rather than choice. Maybe I just have a soft spot for thief characters in general, but I really enjoyed Issa and hope to see her mix with more of the cast we’ve met already in the next and final book in the series that will be released next year.

Overall: If you haven’t gotten into the Craft Sequence yet, you are really missing out on an amazing set of interconnected stories.