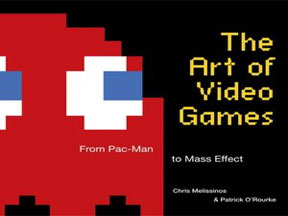 The Art of Video Games:
Pac-Man to Mass Effect

Game designers are communicators, inventors, and dreamers. Like modern-day da Vincis, they stand at the creative intersection of mathematics, science, writing, music and art. Games are the aggregate of these disciplines, plus one key element: none of it matters without the player. — Mike Mika, The Art of Video Games

Art consists of limitation. The most beautiful part of every picture is the frame. — G.K. Chesterton

Chris Melissinos, co-author of the book ‘The Art of Video Games: From Pac-Man to Mass Effect,’ a companion book to the Smithsonian American Art Museum exhibit of the same name, thinks that they are.

To claim anything is art suggests that you can identify something as either art or not ‘ or, at the very minimum, that you’re willing to define what you believe art to be. Melissinos seemed to recognize the need for a definition, and in the introduction, he offers this: When the viewer is able to understand the artist’s intent in a work and finds something in it that resonates with him or her on a personal level, art is achieved. If it elicits an emotion – from disdain to delight – it can be viewed as art.

While not particularly specific (something I’m not faulting Melissinos for ‘ we’ve likely been arguing over what art is since we first started painting on cave walls), this definition does provide a purpose for the book. But is Melissinos successful in arguing that video games are art? And does that even matter?

The book (as well as the exhibit) begins in 1977 with Combat for Atari VCS, then moves forward through time by both software and game system, limited to the twenty platforms believed by Melissinos and co-author by Patrick O’Rourke to have had the greatest impact on gaming in America. The twenty platforms are subdivided into five eras which mark transition periods in technology, and within each era are stills of games (with descriptions) selected by Melissinos and peers, and narrowed down via an online poll by 3.7 million people around the world. (Note: A PDF of the games (by platform) that topped the poll is on the Smithsonian Art Museum website.

O’Rourke was responsible for design and layout, and it’s a good design for its purpose. These aren’t high resolution beauty shots ‘ in many cases, the still is so enlarged that you see each pixel. By showing them this way, and by putting them in chronological order, this structure adds gravitas to games you may no longer think of as groundbreaking. On looks alone, is 1943: The Battle of Midway stunning by today’s standards? Not at all, but if you compare it to what had come just before, it was spectacular – those clouds were recognizable as clouds, and what’s more, you’ll either recall or read in the accompanying paragraphs in the book, they moved.

Within each of the five eras, the book includes four broad genres (action, target, adventure, and tactics), and each platform within each era has a game from each genre represented. What relates these genres is narrative ‘ each is built upon a framework that allows a story to be told. Games that fall into the fighting, driving, or sports genres aren’t included in the book, explains Melissinos, because they don’t tend to lend themselves to that.

Upon consideration, this makes sense. Mario Kart 7 looks great and is a lot of fun, but it’s ultimately about beating other players around a track, while Intellivision’s Utopia is a complex, tactical exploration into world building (and noted in the book as one of the earliest ‘god games.’)

By the way, Melissinos and O’Rourke don’t appear to be arguing that the existence of a story narrative is a prerequisite for calling any video game ‘art,’ but rather a means by which to structure the book and exhibit (by Melissinos’s own definition, if it elicits an emotion it can be regarded as art, and Mario Kart makes me whoop with joy.)

By following the genres through each era, a design theme begins to appear. For example, using the action genre and starting with Era 1 Donkey Kong, you can move forward to Super Mario Brothers 3 (in Era 2), Earthworm Jim (Era 3), Tomb Raider (Era 4), and Halo 2 (Era 5, which we’re in now). Melissinos points out, ‘if you trace one thread over time, what you can basically hear are echoes of design that persist’that stay true to the genre.

I’ve played Donkey Kong and I’ve played Tomb Raider, but I’d never stopped to consider that there might be a thematic relationship between the two – one may be significantly more complex than the other, and Lara’s after antiquities while Jumpman’s out to save his girl, but the player must avoid antagonists and other dangers in each in order to finish either game. I spent a fair amount of time flipping back and forth in the book to pick out these common ‘threads.’

Melissinos also had this to say about the book and the exhibit: What this show attempts to do that most other art shows that include video game art don’t is ‘ we’re not looking at the art within video games, we’re looking at video games as an art medium ‘ as the art form itself.

The idea that a video game does not just contain art but is art is an interesting concept – that art is not only an end product, but a process or an evolution. Expanding upon an example mentioned by Melissinos in his podcast interview with GiN’s John Breeden, the point here may not be to admire how much more sophisticated a game Uncharted 2 is than Pitfall, but to recognize that Nathan Drake succeeds in grabbing his next vine because Harry first reached for one back in 1982. Within this context, the individual images from the games aren’t necessarily offered as examples of artwork themselves (as beautiful as some are), but as representations of something less tangible. It’s as if to say, ‘Look at this moment. It represents what a group of people created with computers, words, and sound, all within the framework of the technology of the day. Isn’t that amazing?’

Interspersed among the video game stills are fifteen essays and interviews from programmers, designers, and artists ‘pioneers in the industry, as well as those actively working in it today. These are a fascinating read within their own right.

So do Melissinos and O’Rourke succeed in proving that video games are art?

I don’t believe that I’m taking away from their efforts by saying that it depends upon the reader’s definition. I mentioned that I was writing this review at the start of my weekly painting class, and we spent the next three hours debating just what art is without coming to any significant conclusion (someone suggested that I ask my iPhone, which helpfully looked up the contact info to the nearest art gallery.) And while the exhibit associated with this book (which I’ve seen and greatly enjoyed) appears in the Smithsonian American Art Museum, it could also have appeared, with some changes, in a history museum or as a science and technology exhibit. But ultimately, I don’t think it’s necessary to believe definitively that video games are or aren’t art in order to learn from and enjoy this book.

Melissinos concludes the introduction of the book with this: A majority of visitors will most likely encounter a game that transports them back to their childhoods and tugs at their emotions, or they may learn about an artistic or design intent in a game that they never knew before. My hope is that people will leave the exhibit – and finish this book – with an understanding that video games are so much more than what they first thought.

For me, the book did just that.