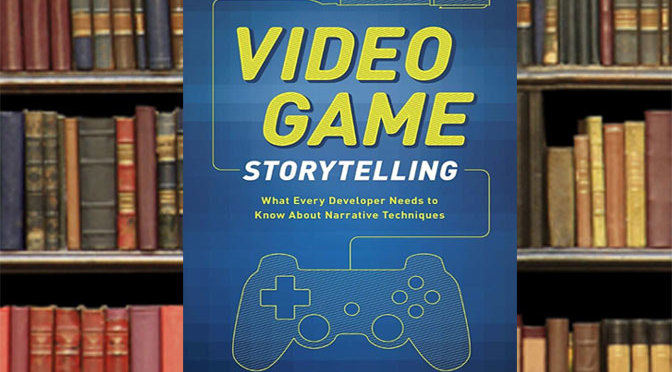 Evan Skolnick’s history in game design is extensive. Marvel: Ultimate Alliance 2, The Godfather: Five Families, Over the Hedge, Spider-Man 3, Spy Muppets, James Bond 007: The Quantum of Solace, and Guitar Hero are some of the many projects he has worked on. He even headed up the much anticipated and then abandoned video game Star Wars 1313. Ever positive, Skolnick doesn’t dwell on how Disney pulled the plug on this gritty, Boba Fett inspired game, only calling it “corporate upheaval.”

He has been everything from Narrative Designer to Producer, but his most interesting job title would have to be Script Doctor. A Script Doctor is called in to fix a problem with the story, usually at the end of game development. This book helps to protect any game developer against having to use such a person.

Video Game Storytelling starts out linking basic storytelling terms and theories you could find in any good literature textbook. The concept of the Three Act Structure, with a beginning, middle and end is gone over from the game developers view of Beginning/Setup, Middle/Confrontation and End/Evolutions. Interestingly the monomyth, Joseph Campbell’s view of the universal hero’s journey, is used not as a way to explain literature but as an architecture game designers can use to protect them from unintentionally missing important plot elements in a game. Campbell’s seven archetypes of characters, such as Hero, Herald, Mentor, Threshold Guardian, Trickster, Shape shifter and Villain are also all explained in game terms.

Skolnick makes extensive use of Joseph Campbell’s book, The Hero with a Thousand Faces, and makes good points about its influence. He points out that George Lucas made extensive use of it in Star Wars and recounts how screenplay writer Chris Volger’s seven page memo on the work led to Disney’s creation of The Lion King. He makes the argument that the monomyth can be used as a “checking tool” for a video game’s story, but not as its template.

This book does not encourage cribbing notes from Campbell. Skolnich notes that Campbell himself borrowed from myths across different cultures and noted psychologist, Carl Jung. The term monomyth is itself borrowed from James Joyce’s mythopoetic circular dream novel Finnegan’s Wake.

The reader is also introduced to the term ludology, or the study of games. Taken from the Latin verb ludere ‘to play’ it is used and expanded on to introduce even the more erudite terminology of, “ludonarrative harmony/dissonance.” Simply put, it describes how story can make or break the player’s gaming experience. It is worth buying the book just to read how Skolnick defines this with concrete examples from past and existing games.

Video Game Storytelling’s discussion on Hero/Anti-Hero is succinct but thoughtful. Red Dead Redemption, Gears of War and Grand Theft Auto support Skolnick’s assertion that the Anti-Hero works well in most violent video game worlds, because of the high body counts. It helps to achieve, wait for it, ludonarrative harmony! He also points out it is rapidly becoming cliché.

His take on how the Villain is a hero in his own story makes for great shorthand in creating an antagonist with depth. He also connects the villain’s henchman with the monomyth, with each henchman acting as a Threshold Guardian on the road to the Hero’s confrontation with the Big Boss. All this is done in readable and unpretentious prose.

While it is a common complaint that many video games lack good stories, this book offers the causes, symptoms and solutions. The common causes, Skolnick states are multiple: no writer hired (a programmer does the job), the writer is hired at the wrong time (too late-ie script doctor) or is hired but not empowered.

Skolnick’s solution comes across with the wisdom won of bad experiences. Hire a professional writer who understands game writing and empower them. Make the writer able to call the shots with the story early. He puts this advice in the Team Leadership chapter.

This then leads to the most interesting chapter, Overall Game Design, where he delineates how to determine the complexity of your game. He advises, “matching player verbs to actions.” The more verbs a player has; run, jump, shoot, decided path, talk to villain, etc., the more complex, costly, and time on task is required of the game design team.

This leads to a great passage entitled, “Game Story versus Player Story”. He asks the reader, and potential game creator some great questions filled with specifics such as, “Will you go for a tightly crafted, largely linear cinematic game like Uncharted or Batman: Arkham Asylum? A narrative-heavy experience with multiple, story-impacting branch points such as Mass Effect or The Walking Dead: Season One? An open-world sandbox more loosely held together by a largely linear storyline like Grand Theft Auto, Fallout 3 or Red Dead Redemption?”

This is followed with a breakdown on the challenges of creating such widely played games. For anyone who wants to make video games or who just likes, ludology, this chapter is well worth reading and rereading.

The rest of the book gives a cursory view of how to make all these decisions a reality. Constructing environments is given more of how to give them the right flavor than a nuts and bolts programming tutorial. The voice over section highlights the special interaction between narrative specialists and audio experts. Casting the right actor and eliciting the right performance is tied up with background sound and even music.

The two-page chapter on Quality Assurance begs to be longer, but given the focus of the book this can is easily forgiven. The author even apologizes for this lapse in an otherwise very balanced book. Maybe if there is a second edition this can be expanded.

He ends this hope list with a final plea that game writers and narrative designers will realize that educating their team is a crucial step to making a great game. This book definitely makes that effort, an effort that hopes to succeed happily ever after.