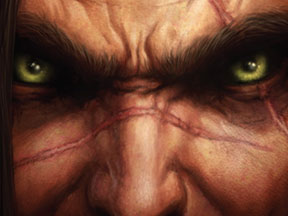 Richard Knaack’s book, World of Warcraft: Wolfheart, opens in the wake of the Cataclysm that ravaged every part of Azeroth in the World of Warcraft. The night elves of the Alliance find themselves facing seemingly insurmountable odds as they strive to hold onto their precious way of life. The Horde continues to press forward with hunger for more resources in the lumber-rich land of Ashenvale and an appetite for the blood of the Alliance.

The story keeps a good pace, charging from one battle to the next while depicting some interesting subplots. Incorporating many universal themes, the characters of Tyrande, Malfurion, Varian, and Maiev bring to life an interesting story about the dichotomy and prejudices that exist within the world, as they each strive to achieve balance and wholeness in themselves and their people.

At the hand of Garrosh Hellscream, the new war chief and the behemoth Magnataur, a band of sentient beasts from Northrend spare nothing as they crush through the forests attempting to destroy its nightelve defenders and seize the whole of Ashenvale. To address the tenuous situation, Malfurion Stormrage calls for a summit of Alliance leaders. His intention is to promote the people of Gilneas to the Alliance and help to build forces and unite against the Horde.

However, King Varian, leader of Stormwind, is harsh and unforgiving when it comes to the people of Gilneas. He opposes their entry and what’s more, he wants their ruler, Genn, dead. He doesn’t accept Gilneas in the Alliance, considering them cowards for their role during the Second and Third Wars when they hid behind the Wall while Scourge devastated Lordaeron and the Forsaken conquered that kingdom.

The book explores mortality as the once-immortal night elves begin to fall victim to the infirmities of age. Family feuds take place on dual fronts as Anduin opposes the old rigid ways of his father, King Varian, and Maiev betrays her own brother, Malfurion, as he seeks to have his people accept the Highborne, while she secretly hatches a plan to have them destroyed. Maiev is still unable to pardon the Highborne for the destruction unleashed on Azeroth millennia ago by their reckless use of magic.

As I approached Wolfheart, I wondered if I needed any knowledge of the World of Warcraft universe to appreciate it. Although, it would aid in further understanding of the lore, it is certainly not necessary to enjoy the book. I find Knaak to be a master of gut-wrenching action sequences, as deft with his words as his characters are with their weapons.

As the war between the machine-wielding Horde and the nature- loving night elves played out, I found myself on the side of the Alliance as the Horde threatened to undermine the whole of Ashenvale. I found Knaacks characters well defined and his storyline to be succinct. His descriptions even added insight to the game as I found myself revisiting places and characters that Knaak brought to life.

As an avid fan of the World of Warcraft series and lore, I found his book a good read. The expansive story was taught and drew me in from the first action scene. All in all, this is an interesting story about acceptance, both of others and oneself.