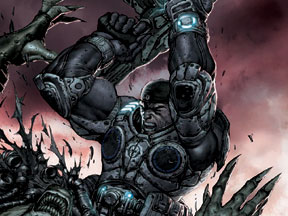 There have been few serious, mature comics based on video games to hit the stands. IDW broke into the market in an amazing way with titles like Silent Hill and Metal Gear Solid, but has done little else in this market since 2008’s release of Sinner’s Reward.

Enter DC Comics with their new push into gaming-based comics, and the October release of their newest hardcover title Gears of War.

Released by the Wildstorm imprint of DC Comics, the Gears title fills in story gaps between the point when the first game ended and the sequel began. While this might be great news to the Gears fan base, this wasn’t the only audience that DC seemed to be interested in attracting.

Yes, the best thing about this collection is that even if you haven’t played through either of the Gears titles, the story found in the comic book stands on its own feet, providing a sci-fi military adventure filled with murderous aliens, muscle-bound heroes, and lots and lots of violence.

A collection of the first six comics in the series, this first Gears of War hardcover introduces us to Jace Stratton, a man that was once a scared little kid growing up during the opening days of E-day (alien overthrow). Now, Jace is a soldier (aka a gear) of the Cog government, and he’s working alongside the most fierce gear: Marcus Fenix.

Though most readers will know, Fenix is the main hero from the game, and while he has a starring role in the tale brought on by this comic, he is by no means at the focal point of the book’s attention. Instead, we get to know Jace better through flashbacks and by his interactions with those that helped raise him.

As welcoming as these moments of characterization are for the actual readers of the crowd, they are indeed miniscule in comparison to why this book was specifically made: Alien Warfare!

From the opening page, the book’s first story arch, "Hollow," has the Delta Squad tearing its way through a Locust Horde, which is mainly comprised of humanoid warriors and intimidating monsters fitted with various weaponry. Delta Squad does its best to take down these enemies with their chainsaw bayonets and seemingly endless firepower, all while getting ever-closer to their objective, which is to find any lost squads stranded in the outer wastelands.

While the story does its best to try and balance the war aspects of the story with the character building ones, sometimes the massive struggles against the Locust Horde get longwinded and left this reader hoping for a less action-filled distraction time and again.

Of course, you can’t have a comic without art. Rather than mimicking IDW’s decision to place artists like Ashley Wood (MGS), Ben TempleSmith (Silent Hill), or the best of the best Shaun Thomas (Silent Hill) on their game-based comic project, DC decided to go the safe route with Liam Sharp for the main storyline.

While the IDW brand of artist is known for having a more stylistic way of drawing comics, Sharp stuck very closely to the overall artistic tone of Gears, which will likely appeal very well to its readers, though, at times, some of the book’s surrounding environment gets lost to Sharp’s lacking detail.

Final words: Go comics! More of this type of crossover is much-needed, and through World of Warcraft, Starcraft, Gears of War, and Mirror’s Edge(!) DC is picking up the slack on game-based comics that has been ignored by most of the other major publishers. And as long as they keep doing the titles justice with good stories and good art, I say kudos. Keep up the good work DC. We’ll be watching, and reading.