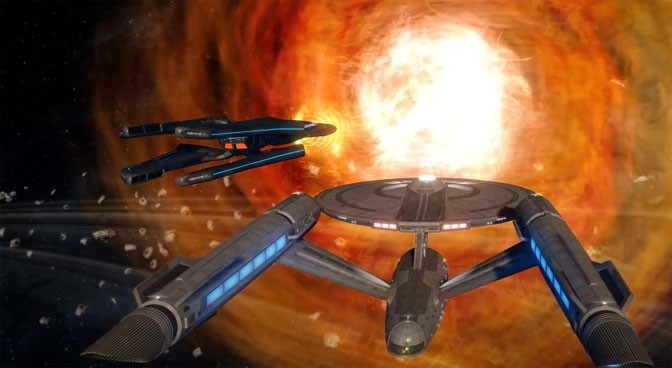 The game is currently available to play for free, and you will be contributing to a great cause if you pick up your controller. Star Trek’s publisher Perfect World Entertainment will be offering bundles of downloadable content, which players can buy for a reduced fee to lend their support to The Boys and Girls Clubs of America.

However, there is also another incentive. Whoever purchases a bundle will automatically enter a prize draw. The lucky winner will join a special Star Trek: The Cruise V, which will set sail next year.

Let’s take a deep dive, and have a closer look at Reflections, by exploring the features as well as other standout elements of the game.

Reflections is a video game that follows on from the bitter and longstanding Klingon Civil War. The Mirror Universe presents a new threat, and Masterson reprises her role as Admiral Leeta, who previously was an enemy. But now she has ventured into the Prime Universe, and she has been charged with preserving the universe.

Reflections will be available to download and play for free from November, and you will get a front seat as you seek to save your allies from tyrannical forces. You will be able to command the Parliament Class, and there’s a new task force operation which you can preside over.

This MMORPG-style game is complete with some of the best graphics, so for the biggest Star Trek fans, it will provide a great form of escapism from their everyday lives.

There are some great features served up by Reflections. One of the noticeable elements is Firewall, which is a new task force operation. Aside from that, you will be able to upgrade the Captain on your spaceship with a new Kit Module Slot. There’s also a new Device Slot, and Trait Slot to check out.

Will you fall into the grasp of the dark forces or can you trust Leeta?

Star Trek has many memorable catchphrases, including ‘Live long and Prosper’. The franchise has been an undoubted success, which has encompassed the four films. Indeed, Star Trek Beyond grossed nearly $340million, and it has made waves over the past 20 years. You only have to look at the range of clothes and merchandise available at the Star Trek shop to discover its effect, where fans get their hands on mugs, t-shirts. You can even imitate Spock by donning his iconic wig.

But it’s not just the TV series or the films where Star Trek’s impact has been felt the most. Star Trek has used its success to branch its success into other industries, such as casinos. Inspired by the 2009 Star Trek film, The Next Generation slot allows players to compete for real money. Some of the best online casino reviews for operators such as SugarHouse and Golden Nugget, will have some mention of this slot.

Reflections offers fantastic gameplay, and with its stunning visuals and soundtrack, fans will be eagerly anticipating the launch of this game. For Star Trek, Reflections could present an exciting frontier. Hopefully, it will live up to the hype.