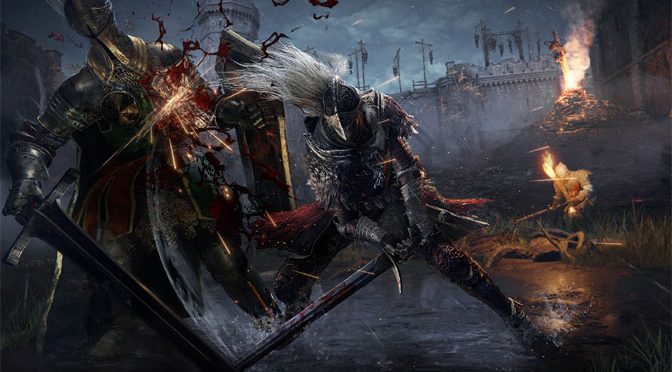 Given the somewhat average performance of other games from developer FromSoftware, it’s pretty surprising that Elden Ring has shot up to quickly become one of the most popular games being played around the world right now. In addition to console players putting in multiple hours, Elden Ring has already become the sixth most popular game of all time on the Steam platform for PC players. It reached and astonishing 952,523 concurrent players, narrowly beating out the New World MMO from Amazon Games, which had a high of 913,027 simultaneous players.

For those who don’t know, Elden Ring is a grand adventure that takes place across The Lands Between. It’s published by Bandai Namco Entertainment America. The game is an expansive Action-RPG game developed by FromSoftware Inc that is available for the PlayStation 5, PlayStation 4, Xbox Series X|S, Xbox One, and PC via STEAM. Players escape into a sprawling realm steeped in a rich and bloody history crafted by Hidetaka Miyazaki – creator of the influential and critically acclaimed Dark Souls video game series; and George R.R. Martin – author of The New York Times’ best-selling fantasy series, A Song of Ice and Fire.

While other titles from developer FromSoftware were considered to be punishingly difficult, Elden Ring is a lot more forgiving, with an open world design and a fair, but still difficult, combat system. Because of this, Elden Ring weaves FromSoftware’s critically acclaimed level design and unique storytelling expertise with a handcrafted over-world filled with exciting and mysterious content players can uncover by exploring the diverse world either on foot or riding Torrent, the Spectral Steed. There is always something exciting or unexpected to find behind every corner of this vast world, which is rated is rated “M” for Mature by the ESRB.

So it seems like a lot of gamers will need to add playing Elden Ring into their normal routine of getting up, going to work, having fun over at Hyperino, scrolling through the latest games on their console or Steam, and forgetting to sleep. However, one user took that to the extreme.

A user named Chris on the adult website CamSoda wanted some companionship while he played the campaign mode on Elden Ring to completion, which can last over 40 hours. So he paid one of his favorite adult cam models $20,160 to join him on his adventure. The two streamed the game while they played for over 40 hours, finally beating the game after a marathon session.

The model 37-year old model, Charley Hart, had never done anything like that before, but says she had a really good time streaming their gameplay.

“It was something I’ve never done before,” Hart said. “I didn’t fully grasp how long 40 consecutive hours is. It takes a lot of stamina, in more ways than one. But Chris and I really hit it off at the onset and it was fun. We celebrated once we completed the campaign like we won a championship. It was a nice accomplishment.”

Chris the blogger was also happy with the experience. “I usually play campaigns by myself in my boxer briefs and overload on carbs (pizza, fast food, etc.) while chugging energy drinks,” he said. “It was nice to have Charley alongside me as I traversed ‘The Lands Between.’ We got to know each other quite intimately and connected on a deeper level. I really appreciated her companionship. I look forward to hopefully streaming with her again when the next big game is released.”

ELDEN RING is available now in the Americas for the PlayStation 5, PlayStation 4, Xbox Series X|S, Xbox One, and PC via STEAM. For more information regarding ELDEN RING, please visit https://www.eldenring.com