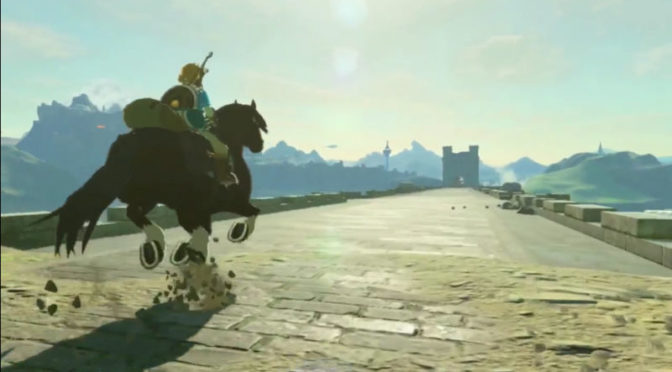 Nintendo stole the show at E3 2016, as it revealed a stunning  trailer for the new Zelda game, which is called Zelda: Breath of the Wild.

The video shows off the openworld gameplay we’ve been promised, with sweeping, magical landscapes with grassy plains, mountains and mysterious, tropical beaches.

This is a, literally, soaring game. The camera pans over stone pyramids and through desert gorges and then Link flies past in a hang glider.

There are also lots of new gameplay elements, as Nintendo has ramped up the roleplaying aspects of Zelda. Link has a mount and he can climb, scaling trees and towers, as well as stopping to light a fire for a spot of cooking.  He can also hunt and fish and fell trees to make bridges.

Breath of the Wild looks like a Studio Ghibli film made into a game, it’s that epic and magical, with the music swelling over the most gorgeous graphics.

Watch the trailer over and over again, right here: