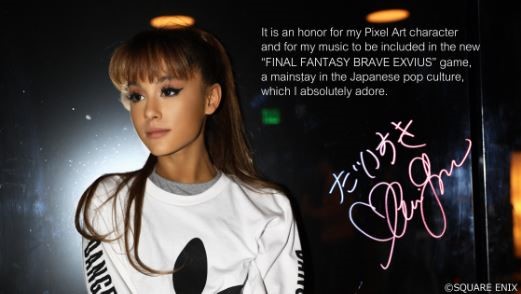 Fans of FINAL FANTASY® BRAVE EXVIUS, the free-to-play FINAL FANTASY mobile game, are in for a surprise this month as internationally acclaimed recording artist and actress Ariana Grande will lend her likeness to the hit RPG. The collaboration with the superstar is further detailed in a new video, which can be viewed on YouTube:

As part of this collaboration, Ariana’s hit song “Touch It” will be arranged as a FINAL FANTASY BRAVE EXVIUS-style remix, which can be heard on YouTube.

Square Enix also announced that FINAL FANTASY BRAVE EXVIUS has surpassed nine million downloads outside of Japan. To celebrate this special milestone, for a limited time, players will receive a significant boost in daily log-in bonuses.

FINAL FANTASY BRAVE EXVIUS is available now as a free-to-play app (with in-app purchases) through the App Store, Google Play and the Amazon App store.