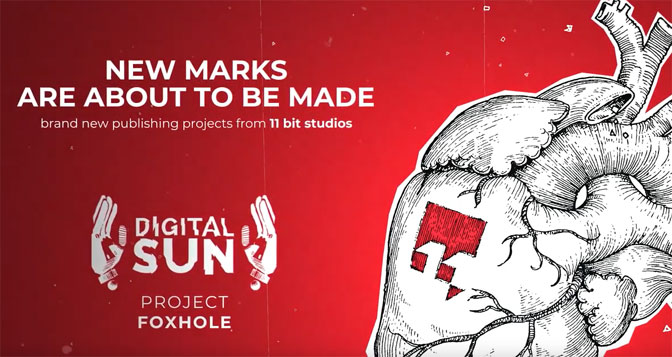 2020 and beyond is shaping up to be an exciting time for the 11 bit studios publishing division. Already boasting strong titles like Moonlighter and Children of Morta, the publisher is muscling up even more as they announce two new games are in production and on the way.

“We’re still an extremely picky publisher. We’re probably even pickier than we were before if you can believe it! Our job is to hand-pick true gems and put our best efforts in with the development teams to help make them shine. We believe in boosting unique projects and using all the marketing magic we have to see them succeed. Right now, we’ve got two projects we’re really proud to have under our wing,” says Pawel Feldman, Publishing Director at 11 bit studios.

Details are sparse right now, but 11 bit can reveal the following:

• 11 bit studios is beyond thrilled to be teaming up with Poland-based Fool’s Theory for their latest project, codenamed Vitriol. The studio behind the artfully created stealth title, Seven: The Days Long Gone, is developing a game best described as a meaningful RPG. Jakub Rokosz, CEO at Fool’s Theory says, “We are truly happy to align with 11 bit studios. They’re known for their ability to find the unique spirit in a game and I believe our upcoming title fits impeccably with the type of projects they like to work on.”

• You might say 11 bit studios is ‘over the Moon(lighter)’ to be teaming up once more with the team at Digital Sun Games. There’s nothing to divulge just yet, but rest assured that the hard-working Spanish developer is putting the same care and attention into their new project (codename Foxhole) as they did with their critically acclaimed indie hit, Moonlighter, but this time it’s a totally new IP. “We badly wanted to work with these guys again. As a team, we feel 11 bit did a great job with Moonlighter and we both want to do even better things together. It’s really as simple as that,” says Javier Gimenez, CEO at Digital Sun Games.