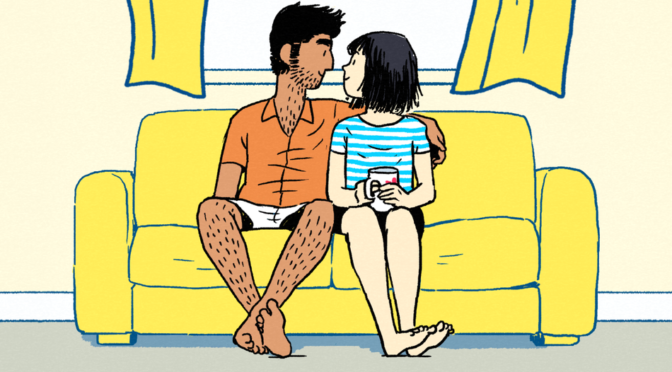 Monument Valley is the stunning puzzler that made people sit up and consider mobile as a viable platform for making atmospheric and emotional games. The success of that game and the affection people have for it leaves a long and beautiful shadow over what Wong would do next.

“Especially early on in the process of setting up this company and figuring out what we  were going to make. It definitely felt like a lot of pressure and I tried to ignore that as much as I could.” Wong also credits the success of Monument Valley for this chance to take on new challenges, “It did feel like I was given this opportunity because people had recognised that work and maybe there were expectations because of that.

“I don’t know if there’s a smart way of going about it. I feel  the pressure less now. Florence took on its own spirit and became its own thing and I’m super happy that I’ve made something that I care about just as much as Monument Valley.”

Mountains describes itself as making craft games, setting itself apart from the classic indie game studio label. “It’s kind of the opposite of mass market and mass produced. When we say ‘craft games’, we think of handicrafts and craftsmanship. We think of craft beer, hand drawn labels, your local brewery and that personal care and a bit more personality put into the work.

“I think that kind of encapsulates what I mean when I talk about how this studio is going to be small and independent and creative. We’re going to make something really special and that we care about.”

Florence is the first title from  Mountains and embodies the beginning of a process of finding the studio’s style. Wong describes Florence as a “very small and intimate kind of experience. It’s hand drawn and I think the music is really lovingly made. I think that speaks to the approach that we have to making games.”

On the surface, Florence is very different from Monument Valley. It’s not a minimalist, geometric fantasy, instead, Florence is a snapshot of ordinary life and an ordinary type of relationship that everyone has experienced. It’s real life made magical through interactivity.

Wong describe Florence, “It’s the story of a young woman and the ups and downs of her relationship, as told as an interactive storybook.

“In saying that I’m focusing on the fact that it’s a story. It doesn’t really have any main gameplay mechanic, nor do I think we set about trying to define it by that. So it’s not like you do this thing and then this thing and it loops around and you level up and score points.”

For Mountains, story came first during the development of Florence. “We start with story and how you support that story and tell that story using game mechanics. I usually tell people it’s a game made for people who don’t usually play games. It’s small and it’s for mobile and it’s particularly made for mobile.”

Florence also respects its platform, as a space where Wong and his team at Mountains can reach a wider audience by creating an accessible and intuitive experience. At times the game expects you to change the aspect of the phone from portrait to landscape, for particular scenes. Florence is also someone who spends a lot of time on her phone.

“It almost plays on the way that we use mobile phones. Florence spends too much time on social media and talks to her mother on the phone. She’s too busy listening to music and on social media to pay attention to the world around her.”

The wide audience available to a developer making games for mobile factored into the type of game Mountains made. Wong says, “We had to find something that could mean as much to people as Monument Valley, but not necessarily the same people. Just some people.”

Games don’t usually put romance at the heart of their stories, unless they are dating sims or visual novels. Wong describes love stories as a “blind spot for games”. He says, “I guess games don’t immediately lend themselves as a good vehicle for dealing with emotions and all the nuances that go into that. But I thought, what a great challenge, what a great thing to explore.”

Florence is the story of Florence and her relationship with Krish, a cellist she hears playing in the park one day. They meet and fall in love and the player joins them on the journey that is their relationship. From their first date to their first argument and the awkward thing of moving in together and making room for each other and making compromises – it’s all there in Florence.

Conveying a real romance, not a Hollywood romance is a hard thing to do in any medium and games rarely tackle it. Nathan and Elena from the Uncharted series are probably the closest thing in a AAA game. BioWare is well known for its relationships as side quest – woo the love interest by choosing the right dialogue options and completing their relationship mission to get a sexy scene. It’s clumsy at best.

Looking at why games don’t do love Wong says, “Maybe it’s that inherited masculinity, but also it’s easier in a way to portray concrete finite things in games. The earliest games were about racing, shooting or combat because it’s either zero or one. Either an enemy is alive or it’s dead. That’s very easy to get a computer to model, but to model a complete relationship and make a game out of it is trickier.”

On Florence, Wong faced those challenges head on. “It was a process of starting from the ground level. What can we do with a mobile device? What are the ways to interact and evoke emotions? That was a big struggle. It took a long time to get that right. Our earliest prototypes were really clumsy and just didn’t resonate. We weren’t pulling at the heartstrings and so we had to develop that language.” 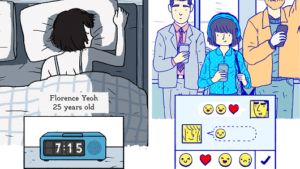 By eschewing the traditional game elements, such as rewards, points and levelling up, Florence could avoid the love as transaction feel of many games featuring romance.

“We always saw it as these two people who are going through this relationship and you’re along for the ride, but you can’t really affect how you’re rewarded because there are no rewards apart from the pleasure of seeing what happens.”

When it comes to influences, Wong turns to comics and the work of Moebius, who was also an influence for Monument Valley. Florence has no dialogue or text, so it plays out like a comic book, using visual storytelling to great effect.

“By telling the story through images, the reader has to fill in the blanks and kind of imagine exactly what the story is or what’s going on. I think that translates to games too. A lot of the magic of games comes down to your interpretation of it.

“I was thinking about a graphic novel called Asterios Polyp by David Mazzucchelli. It uses visual language to tell the story of the relationship between two people. One is represented by blue and harsh edgy lines, but the other is pink and uses very sketchy lines. Then they come together and adopt a bit of each other’s art style. Using the aspects of the medium as a metaphor for the relationship – that affected me a lot.

“I was also drawing on Eternal Sunshine of the Spotless Mind and 500 Days of Summer. They are both films that try to depict love and relationships as it actually is. A warts and all approach, as opposed to the classic Hollywood girl meets boy story.”

Telling a Universal Story through an Interracial Relationship

Florence also tells the story of an interracial relationship, but in a way that’s universal. Florence is Chinese Australian and Krish is of Indian heritage. Although their race isn’t central to the story, it does play a part in the objects that inhabit their lives and the relationships they have with their families.

“I think the world still thinks of Australia as a very white country. Certainly, when I was growing up here my friends were all sorts, but we didn’t see that represented in the media.

“From one perspective you could swap any of The characters of the game out for people of any race and it would still hold up. It was important to me to go against the norm and show some more of Australia and draw upon some of my own experiences. Florence has a lot of me and my sister and other Asian women that I know. Her relationship with her mother is a very special kind of relationship. It’s not that other people can’t relate, but I really wanted them to speak Cantonese to each other. That’s a very common thing, where Asians born in Australia only speak their mother tong to their parents.

“When I asked my friends of Indian descent, ‘how do I write Krish well?’ they all said Indians are really close to their families. For Krish it would be very important for Florence to meet his family. For Florence it’s the opposite. Florence knows that she’ll get in trouble if she brings home a boyfriend who she’s not immediately going to marry. An Indian boyfriend, especially an Indian musician is not the ideal, so she keeps Krish a secret from her mother.” 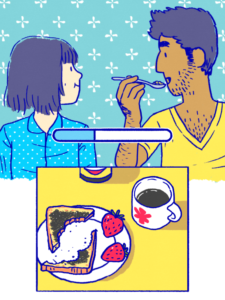 nce uses a range of delightful and surprising elements. Conversations are represented visually as speech bubble jigsaws. Players have to fit the pieces together to keep the conversation going and the shapes change depending on the nature of that conversation.

On their first date, Florence is nervous and struggles to put her words together, so the broken speech bubble represents that. Later in the story, Krish and Florence argue and both sides of the conversation are represented. However, the player only fixes Florence’s pieces and the shapes are more jagged and it’s a race to complete her speech bubble before Krish can win the argument.

Wong says, “They’re using language, but it’s not for the same thing. There’s a different metaphor at play because they’re arguing. Expect more of that. We take mechanics that we’ve introduced earlier in the game and then later on in the relationship we change it to show how the relationship has changed.”

Of course, the player is left to decide what the argument is about or what each of the characters might be saying. The lack of huge tracts of text, which are hallmarks of visual novels, gives the player space and makes it easier for that romance to seem universal.

“I do respect that visual novels and certain Japanese games have explored love and romance and intimacy, but they’re a bit more niche and don’t get the same coverage. Hopefully, with Florence, we are somehow bridging the gap.

We are taking this thing that people care a lot about that is in some ways difficult to design and using our experience and marketing muscle and the fact that we’re making it for mobile to hopefully bring it to a really wide audience.”

Florence is out now on iOS and coming to Android later in the year.