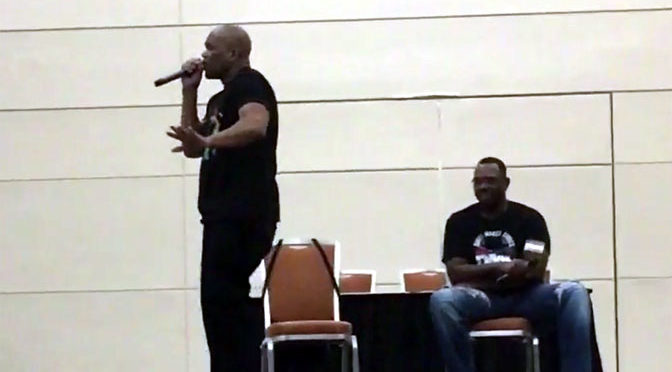 I did not mean to attend this panel, but I am really glad that I did! On Sunday the fire alarm was pulled in the Baltimore Convention Center, and it meant that everyone including artists and vendors. We had to wait for an hour before we could go in, and this pushed back panels and messed with the schedule. Baltimore Comic Con staff did not do a good job of letting convention goers know about the schedule changes. I got to the Ballroom 20 minutes early waiting for the Iron Fist panel to start, and after 10 minutes, the D.M.C. panel started.

Some of the celebrity guests slipped in and watched this panel. I was excited to see John Harlan Kim join the audience; he’s an actor that portrays Ezekiel Jones on the TNT show The Librarians (which I highly recommend for any fantasy/literature lover). I also did not really know who DMC was before the panel. But after the panel I feel like I could write a sizeable paper about his life. D.M.C., or Darryl McDaniels, is a rapper and part of the hip-hop group Run-D.M.C. He was an interesting and energetic person to watch on stage. The moderator did very little to prompt him, and when D.M.C. was directly asked a question he got up out of his chair and started to tell the story while pantomiming and gesturing. DMC had wonderful stage presence, which made it easy for me to stay interested.

It was setup to be very casual; D.M.C.’s friend was the interviewer and moderator, and he noted that he wanted it to have a talk show kind of vibe. Daryl talked about his love for comics and how this translated into his rap career and came full circle leading him to write his own comic series. I found it interesting how despite he credited comics with helping him keep straight A’s when he was younger.

Darryl said that he learned about WWII from Captain America, and other subjects from various comics. He used to use tracing paper to go over the artwork and eventually started drawing his own work in his free time. “Music is my second love, comics are my first love,” said Darryl. It wasn’t until high school when D.M.C. started writing raps and linked up with Run. He wrote his lyrics as superhero adventures, with lines like “Now we can crash through walls, cut through floors.”

The panel ended with D.M.C. talking about his comic series, Darryl Makes Comics (see a theme?). It is set in an alternative universe where D.M.C. decides to become a teacher instead of a rapper, and also happens to have super powers. He spends his time saving people and fighting bad guys as well as occasionally other superheroes.

D.M.C. also brought up the Run-D.M.C. upcoming album, and mentioned that it will feature, Public Enemy, Slaves On Dope, Miles Kennedy, a member of the band Sublime. Comic book artist Tony Moore is creating the cover for the album.