For Video Game Tuesday I thought I’d do something different for the next few weeks. I’m going to talk about my time playing Destiny, and what I liked while I played, and didn’t like. Plus any amusing bugs I can find and document. It’s the first entry in my Destiny Daily Log Day 1!

Creating my Main: So I went with a Hunter as my main character, for those who don’t play MMOs a main is the character you play the most. I really enjoyed playing as a Hunter and liked the focus on speed and precision as that fits my personality perfectly, although I’ll probably alt a Warlock for variety, again for those new to online games an alt stands for an alternate character who is played less but still played. 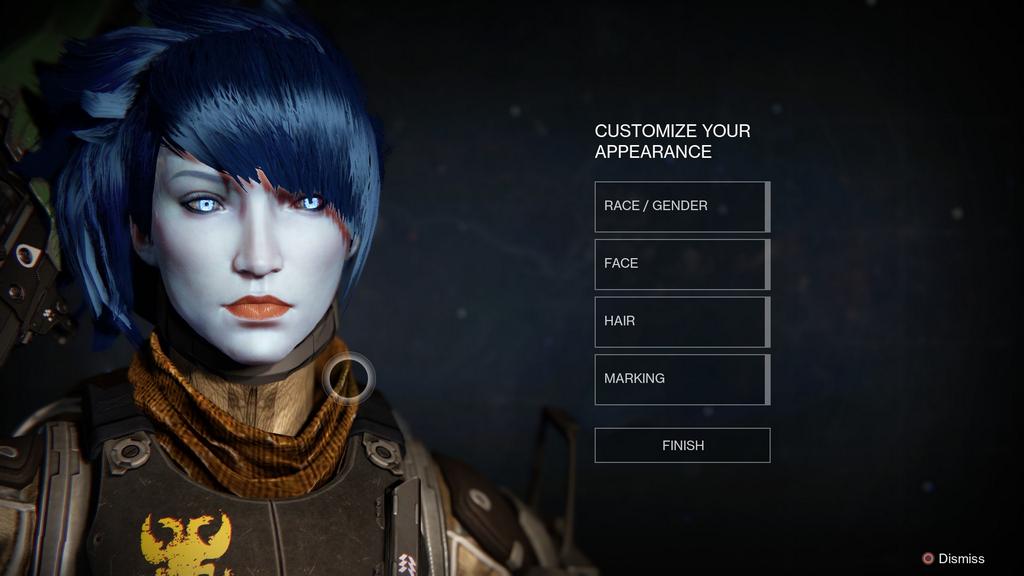 Playing as a Hunter: For those unfamiliar with Destiny a Hunter is a class that starts out with the Gunslinger sub-class, a class focused on improving your guns through various talents you unlock as you level up. At level 15 you can than play as the second sub-class the Bladedancer, more on that later. I found that as a Hunter I’m much more vulnerable to damage than a Titan, the heavily armored class of Destiny, and while not as vulnerable as a Warlock, the spell casting class equivalent of Destiny, I still recovered my health slower than a Warlock. This led to me utilizing the strong points of the Hunter class, which is Agility which grants you more move speed, quite often as I had to constantly run around the battlefields I was in to avoid being killed. I don’t mind doing this as it led me to being able to get to places ahead of enemies who were right behind me and gave me just enough room to regenerate my health.

Guns: Everyone starts out with the same gun, an Auto Rifle (think assault rifle from CoD meets the AR from Halo). I don’t hate full auto weapons, in fact I use the Heavy Machine gun for my heavy weapon in PvE enviroments, PvE is Player vs Enemy (AI not players) for those MMO challenged players. That being said for a primary weapon I prefer something with a bit more range and either a single shot or burst fire capabilities, so I chose the scout rifle after the first mission. I really love the scout rifle because it meets my needs for range with it’s single fire capabilites. That said it’s not amazing in PvP, Player vs Player (standard deathmatches or the like in online Multiplayer is PvP). Having not taken part in PvP as of yet I didn’t really care as I enjoyed doing the story missions.

Story: I love the story missions, in fact in one of them you even get to wield a sword. I was psyched when I realized I could freely use a sword prior to getting the Bladedancer sub-class. That said it’s really hard to do them at the suggested levels alone, even if you meet the level suggestion it’s not going to be easy. I wish some of my friends were online when I started playing and I would’ve played with them. That said I’ll probably do that with my Warlock. 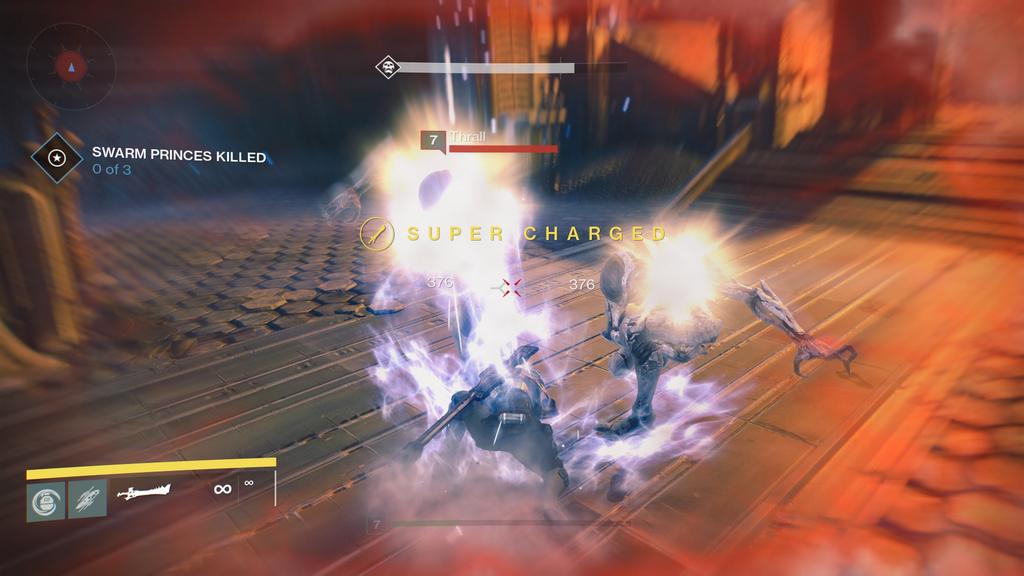 Strikes: Strikes are like dungeons from MMOs. There are some parts so far near the beginning from what I can tell, where you can see other players not in your group. That said after that short introduction you and your two companions are on your own against hordes of enemies, in both Strikes that I played yesterday there were portions where you had to hold an area while your ghost unlocked a door. I hope this isn’t in all of the strikes, because that’s an annoying mechanic and shouldn’t be utilized often. That said the second Strike I took part in, the one on the Moon was severly overtuned in terms of difficulty. The last boss took me and my group of very competent companions out four times before we finally beat him. That portion of the strike had way too many enemies spawning, even with each of the classes we had trouble more against the adds (additional enemies that spawn during a boss encounter) than we had against the boss. The boss was plenty hard enough with instant kill melee swings and a rapid fire machine gun that would kill me in 3 hits, thank god I can run fast! The last attempt took nearly 30 minutes before we killed him. That should be the time a strike takes to complete, not just one portion of it.  The reward was well worth it though as I got two pieces of rare equipment, a hand cannon I’m still using 3 levels later and probably will for a while more, and a pair of gauntlets that complemented the hand cannon, again I’m still using it.  I actually like my Hand Cannon a bunch, as it’s got nearly as much ammo as a Scout Rifle while being faster to reload. Only a bit less range on it, that I can make up with my own ability to use the iron sights to snipe with. 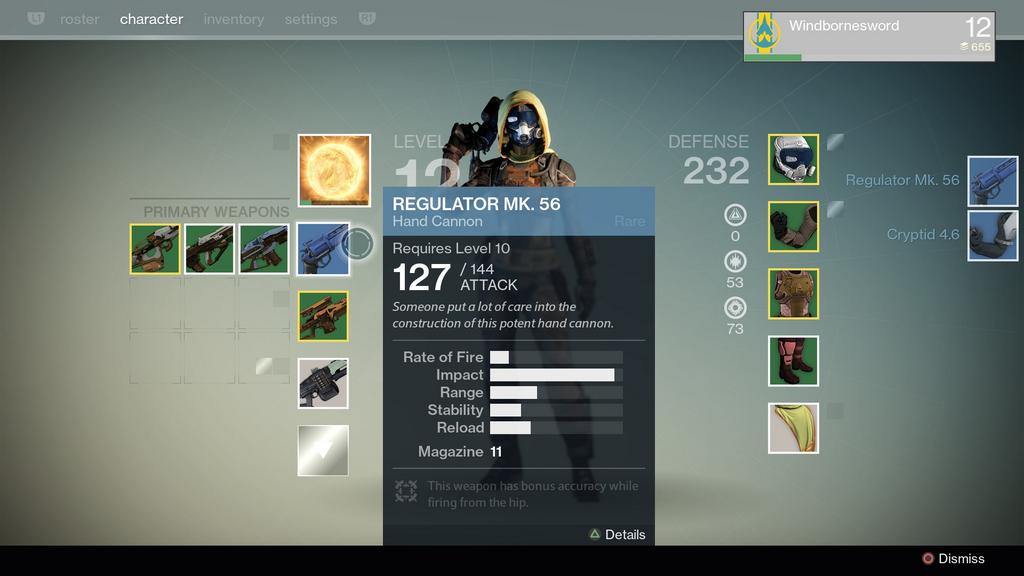 My goal for the day: I guess I should talk about what my goal was for the first day of Destiny, and that was to get to level 15 to play as a Bladedancer hunter. I really wanted to play as one ever since I saw the skill tree in the Beta and the videos released featuring it. As someone whose main in World of Warcraft was a Rogue for 4 years, I always preferred melee combat even when offered the option of ranged combat. That said once I did finally hit 15 and turned on the Bladedancer sub-class I was dissapointed, I realized I had to re-level it all up again without the experience boosts provided by Story missions. That being said my goal for the second day of Destiny is to level it up so I can at least use the melee ability, Blink Strike, and the super ability, Arc Blade. I’m going to see if Strikes still provide an experience bonus even if they have been completed before. I think they do so I’ll probably hit the first Strike, The Devil’s Lair, again and while I can only use my grenade and my Double Jump ability as a Bladedancer I should be able to level it easier than just murdering standard mooks out on Patrol missions. 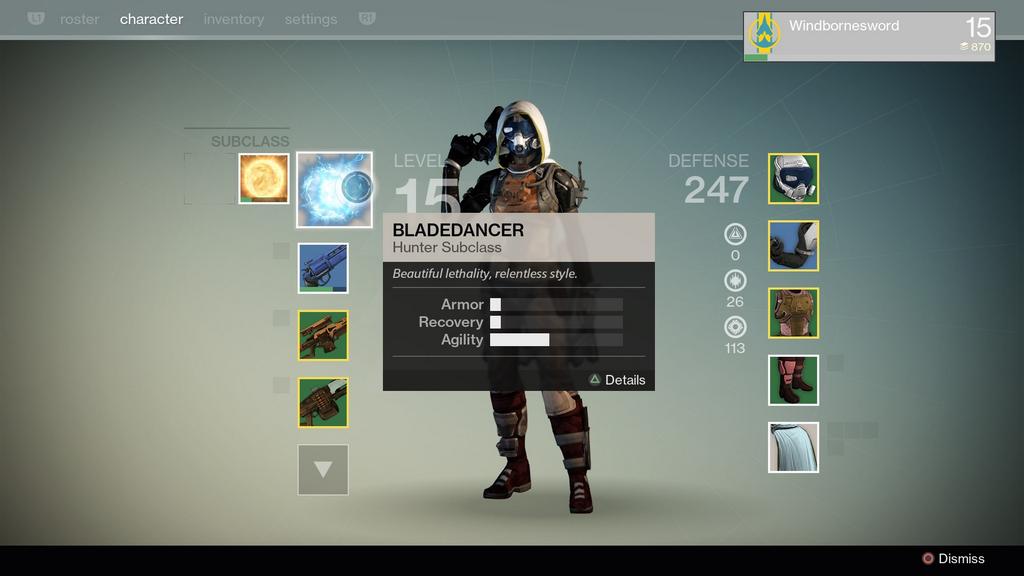 Art: I loved all the different worlds, even the Moon which I had explored a tiny bit of in the Beta, had distinctive feels. I even got a longer cloak finally by buying an engram from the Cryptarch in the Tower. Not as pretty as the one I had in the Beta, but I’m okay with it. 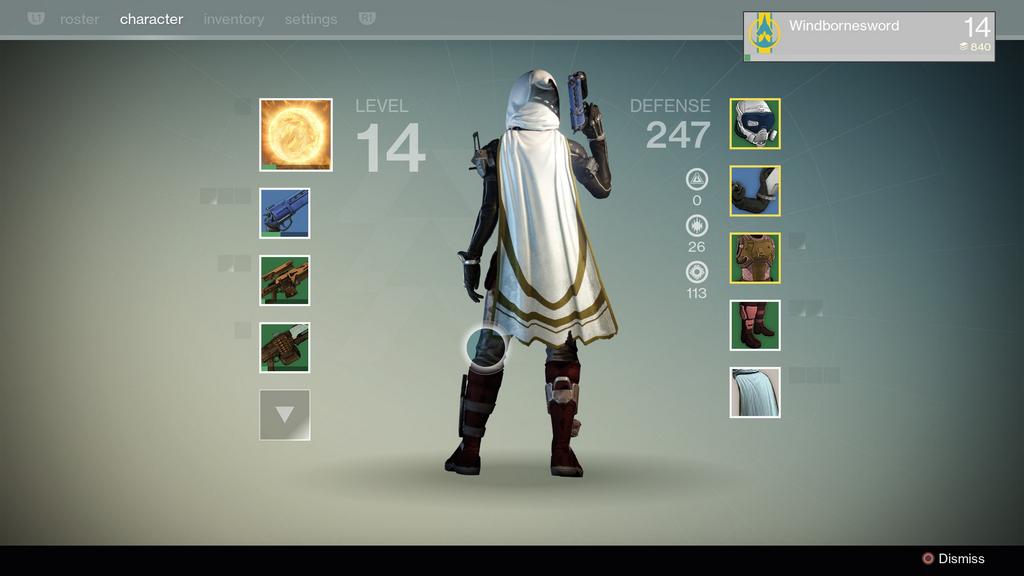 Exclusive Content: As a PlayStation 4 player, I really loved the ship I got for free with the game, as it’s so much prettier than than the one you start with.  Plus black is my next favorite “color” (yes I realize it really isn’t a color) after blue. 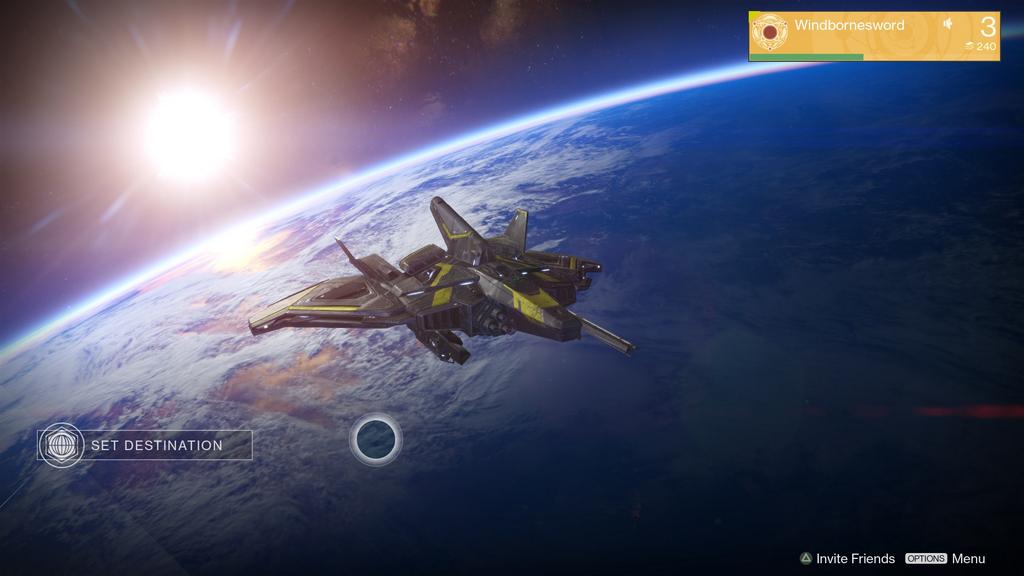 Overall: I love Destiny, it’s everything I wanted and I’m looking forward to playing the hell out of this game for years.

Bugs: I promised to post any amusing bugs I’d find and here is one that is fairly odd. Enjoy. 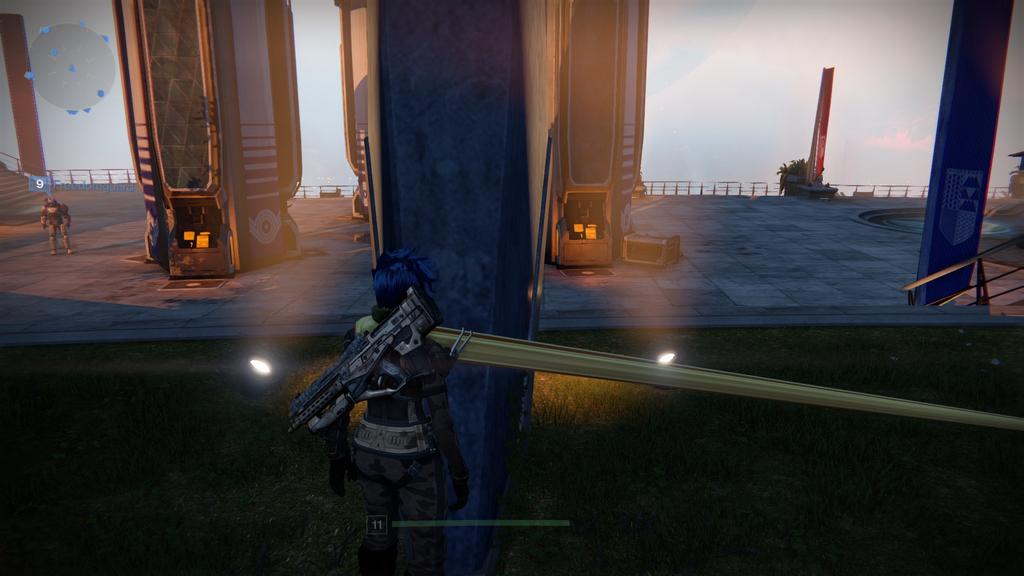