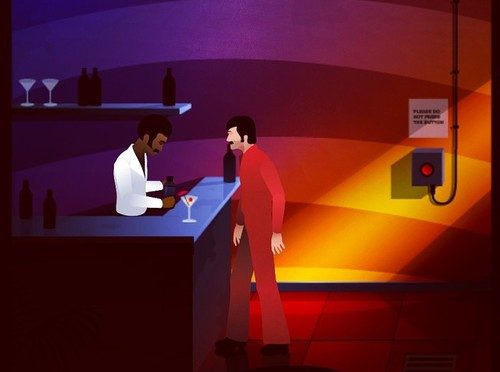 The second part of House on Fire’s The Silent Age continues janitor Joe’s time-traveling adventures as he saves the world from certain destruction. Like in the first episode, Joe travels between groovy 1972 and a terrible post-apocalyptic future with his solar-powered time-machine.

Players continue using the same time-travel mechanic. Plant an apple in 1972, pick it in the future, bring it back to the seventies to feed a hungry scientist. (Doing this chain of actions, I was about 90% convinced that this was how the mysterious disease was spread) Open a valve in 1972, and drain water from the future.  I don’t know if I better understood the time-travel mechanic or House of Fire’s particular brand of point-and-click puzzle solving, but I felt like I flew threw the second half of the game. Especially compared with Episode One, in Episode Two I spent almost no time walking from room to room, trying to figure out what to click, and what to use together. But, of course, I did try some ridiculous combinations to see what Joe would have to say.

The loose ends in the first half — why is Joe listed as a person of interest? Where did Frank go? What started the plague? What will happen to Archon Industries? Will the environmental saboteurs succeed? — are wrapped up well in the second part. In the beginning of Episode 1, Frank, Joe’s boss, leaves abruptly, getting Joe the “promotion” that kicks off off the entire plot. I assumed that Frank was tragically killed while emptying the wastepaper baskets in one of the shady laboratories, but in episode 2, he is revealed as Yuri, a Soviet plant, investigating Archon’s labs. I laughed out loud at that part.

After endless jokes about disco, polyester, and dying in extremely manly ways, I was surprised when the end was terribly emotional. (Without giving it away, I’m talking about the moment in the stasis chambers.)

The game is now available as an in-app purchase through the first episode.