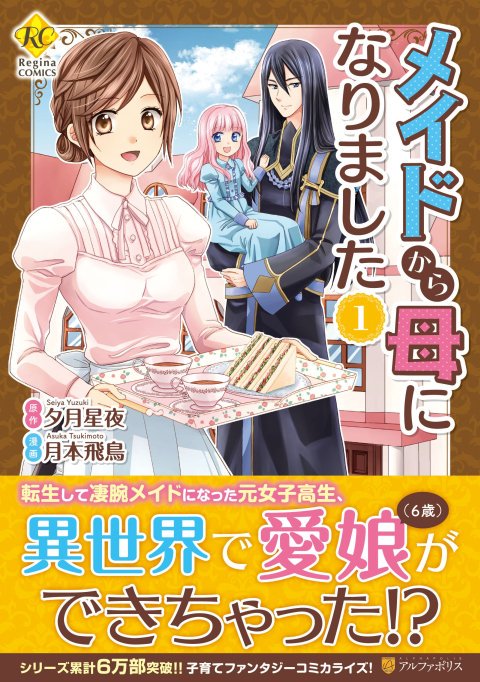 This week for Sensate Saturday I’ve got a Quick Review of an adaptation from a Light Novel. It’s From Maid to Mother by Yuzuki Seiya!

Plot Synopsis: A high school girl reincarnates in another world as Lily Ruzsa. While she occasionally reminisces about her past life, she is now known as “the Maid of the Royal Family,” after helping to rear the lady who eventually married the crown prince. One day she gets a sudden and unexpected request from the Court Magician….

Plot: The plot of this first chapter is more amusing than heartwarming, though I will say I took a peek at the second chapter and it does become rather heartwarming. This isn’t a series full of action and adventure, it’s decidedly Slice of Life and that isn’t a bad thing.

Characters: Lily is our main character and she doesn’t have any cheats, or special abilities from reincarnating into another world. All she has is her knowledge as a motherless child from Japan who had to take care of her younger brother and sister while her father worked. It’s a refreshing change of pace from the cheat level characters that so often happen in Tensei or Isekai stories. Leonard, the male lead, isn’t a bad character just really blunt and socially awkward. I like him quite a bit, if only because I see parts of myself in him.

Art: The art is excellent, which makes me really want to read the original Light Novel, however said Light Novel hasn’t been translated past the first few chapters.

Overall: A great read if you need something to warm your heart up on a Winter day.

For those who like: Slice of Life, Fantasy, Magic, Drama, Romance, Excellent and Heartwarming Plot, Great Cast of Characters, Awesome Artwork.