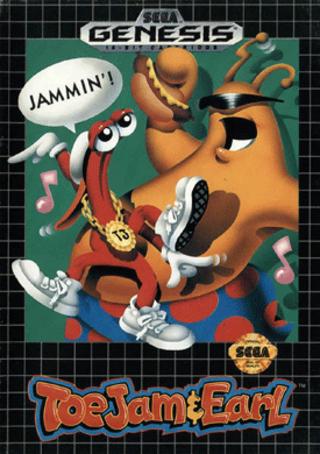 This week for Retro Game Friday I’m back with a game I failed at miserably as a kid. It’s ToeJam & Earl!

Plot: The plot is pretty surreal, honestly calling it satire isn’t at all wrong. That being said I couldn’t remember it until I looked it up. See I just failed at playing it miserably when I was over at my friend’s. Though looking back and seeing it was one of the “founders” of the Roguelite genre does make a whole bunch of sense. I’m not a fan of very punishing games, and this is one of the worst offenders. That being said it might just have been my lack of skill and frustration at the random elements of the game at the time. I was fairly little when I played it. Regardless it’s a fairly basic plot, even if ridiculous.

Gameplay: This was mainly a non violent exploration game with the player tasked with finding ship parts in order for ToeJam and Earl to return home to Funkotron. You couldn’t attack unless you had a tomato which didn’t help me with my frustration at this game at the time.

Art: The art is okay, it’s not amazing by today’s standards, but it’s not aged as poorly as a 3D game would have.

Overall: Not necessarily a must-play game, unless you enjoy very punishing games.