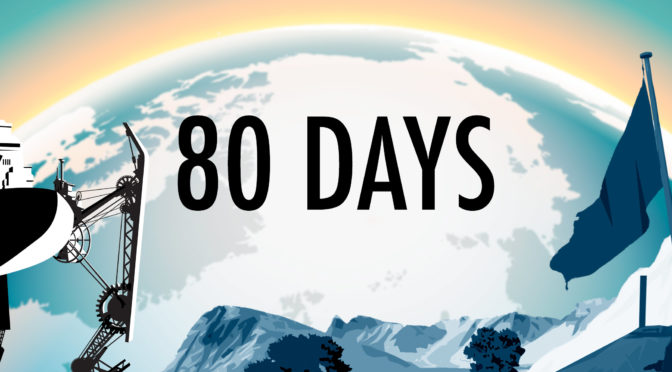 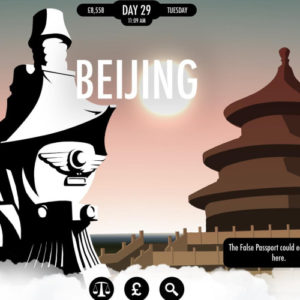 Let’s talk about how freaking great 80 Days is. In this iOs game, you play as acrobat-turned-valet Passpartout in a steampunked version of Jules Verne’s Around The World In 80 Days. (I read this novel when I was in middle school, and it stuck with me, both in terms of inspiring my wanderlust and in questioning why there aren’t any women travelers in great adventure stories.) The game 80 Days is close to interactive fiction, allowing players to make many choices in text, but there’s still a lot of visual elements and great art. As Passpartout, you’ll need to keep your fastidious master happy, while choosing the fastest path around the globe, and trying not to run out of money or get kidnapped by opium dealers.

The game includes some resource management, as Passpartout’s valet duties include packing for the trip, and balancing which items to pack, what to buy, and what to sell for traveling cash (or pure profit) along the way. But extra suitcases will cost extra baggage fees, and running out of money means sacrificing days while your letters of credit are checked and your funds are withdrawn from your London bank.

Encounters with different characters will open different paths for Passpartout and Fogg, both literally opening up new routes and transit types, and more figuratively opening up new story options. Story options can lead to danger and travel delays, or to romance and valuable items. With so many branching paths, it can be a little frustrating to be unable to follow every lead. I encountered a detective investigating Fogg (naturally, my Passpartout refused to speak against my master, but I wanted to follow the storyline!), a strange shipboard murder mystery, an intriguing opium den, and more, but the need to get around the globe plus the sheer number of possible encounters kept my from pursuing everything I wanted.

80 Days does a great job using time as an additional mechanic. Passpartout and Fogg are in a hurry, so obviously there’s no time to delay, but time is applied as countdown while in a city, helping create a mood, as well as a resource to be bartered for other resources. Four hours for a visit the market. 3 days for a wire transfer of £300.

I quickly lose interest in minigames, button-mashers, and appointment-style games, but I just don’t have the time to devote to a really long play sessions. 80 Days requires almost no explanation, since your goal is clearly to make it around the world in 80 days, and the UI is so clean and simple that you won’t need to spend a lot of time finding options in menus. It’s easy to pick up and play, and also works for longer play sessions.

After successfully circumnavigating the globe a few times, and getting my record time down to 68 days, my next trip will probably just be a meandering route of all my favorite cities.