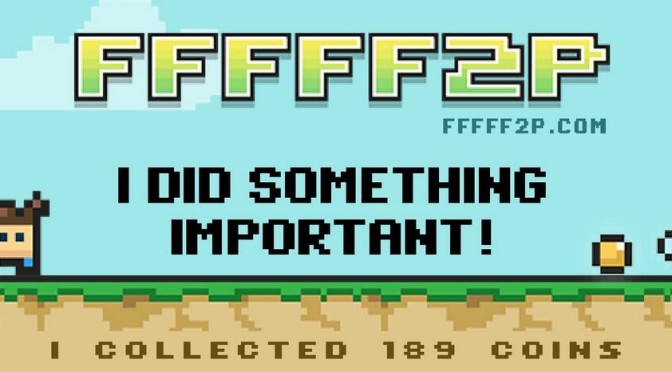 Free Free Free Free Free To Play smartly satirizes the usual free-to-play model by blatantly bribing with in-game currency for social sharing and return gameplay, and blatantly offering in-app purchases to unbalance the difficulty. The message is obvious, and the game is still a cute and playable playable casual game.

When the game opens, your girlfriend, Princess Pixel, is kidnapped by an evil monster who throws ads at you, trying to either squash you by dropping an advert on your head (I died a lot that way) or trap you in a cave of flashing adverts (I died a lot that way). Typical free-to-play calls to action, like limited time and bonus and so forth, flash on the falling ads. The message is clear: our beloved videogames are being held hostage by free-to-play mechanics.

I’d really have liked the option to switch sprites, and be a little girl player trying to rescue Prince Pixel. But this game satirizes free-to-play mechanics, not the perceived difficulty of adding a playable female character or the constant invisibility of female players, so male is the only way to play. FFFFF2P is far being from the only game where the player must be a male, but it’s particularly sad that this game so cleverly mocks scammy free-to-play games as one of the depressing and insidious trends in our industry falls prey to another depressing industry standard, the lack of playable females. An option where you could pay extra to be a girl (GET IT???) would fit well with the theme.

I’m not particularly good at platformer jumpy games, and gave this one a try mostly to check out how Elevate Fun mocks free-to-play mechanics. My lack of skill is just fine because players can get several times the coins they’d earn by jumping and closing ads by sharing on Facebook and Twitter. So FFFFF2P literally gave me the choice between earning coins through gameplay or quickly spamming my friends to get lots of coins. This is Cow Clicker-style interactive satire.

The game FFFFF2P actually is free-to-play and ad-supported, so real ads will occasionally appear as you play. I tapped one out of curiosity, and was prompted to download Blizzard’s CCG, Hearthstone, another free-to-play game that’s recently been criticized as free to play and pay to win. Another level of satire, or just an indie studio trying make some clickthrough cash to keep the lights on?

This weekend, I’d downloaded the Kardashian game, too, mostly to figure out how it could possibly be so profitable (Answer: I have no idea. So far the most entertaining part has been making my aspiring-starlet avatar and discovering that no pretty girl can wear glasses). So whenever I picked up my iPad, I’d have the standard invite from the Kardashian game to bring my doll to a pretend photo shoot, next to the tongue-in-cheek push notification from FFFFF2P inviting me to click for coins, which couldn’t have made the comparison more obvious.