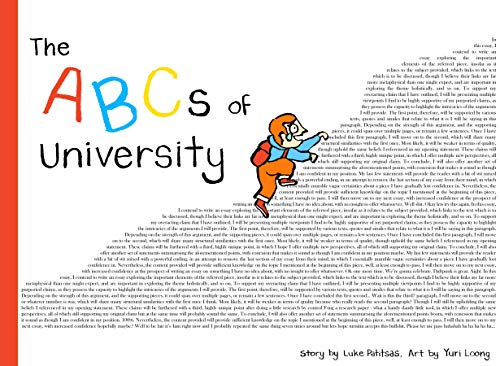 Hey all I’m back with a book I was requested to review by the author for this week’s Bookish Wednesday. It’s The ABCs of University by Luke Patitsas!

Plot: First things first, this is a picture book that is only 35 pages long, and it took me about 5 minutes to read it from end to end. I probably could have done it faster, but I had just woken up and I wanted to see what this email was all about. Secondly this doesn’t really have much of a plot, except poking fun at all the typical college drama and struggles. Frankly this is amusing but I wouldn’t buy it myself. That is partly due to me having gone through college and hating it, and partly because I’m a spendthrift and I can’t countenance spending $7 on a book that won’t hold my attention for more than ten minutes, not to mention it taking me less time than that to read. That isn’t to say that this is a poorly done book, the artwork is decent, and fits the style of a children’s picture book, but it’s not a sprawling epic you can really sink your teeth into either.

Artwork: Miss Loong did a pretty good job fitting the theme of the book, but most pages are fairly empty with just a single character and some words on it. For a picture book that is fairly lackluster, and leaves a lot to be desired. What is there though is well done, so credit must be due for that.

Overall: A fun book, but not worth the price it’s being sold at. At least to me, for others they may disagree, but I cannot advise anyone to buy it at it’s current price point.