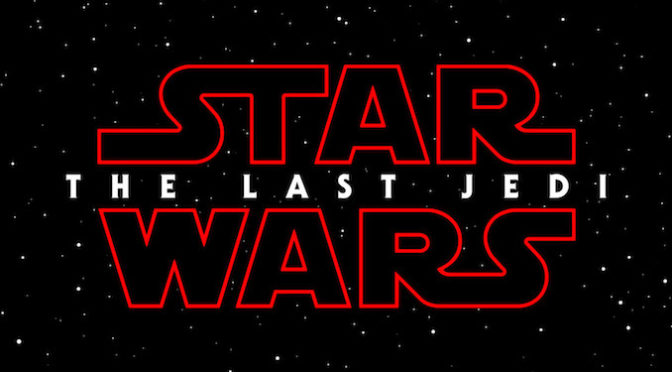 The We have another day down at Star Wars Celebration Orlando 2017 and the 40th Anniversary of Star Wars. Friday saw the world premiere of the The Last Jedi trailer and what fans waited either overnight or in line for six plus hours to see. I was one of the latter people but it was well worth it, just to be there with the fans as we saw the trailer and learned more about the upcoming film to be released in December.

To be in the room full of fans anticipating the long awaited trailer and to hear anything about the new film was exhilarating. That and we got two trailer previews and a movie poster. As for any further news regarding the movie only what we learned from the panel and trailer is what we are going to get. Kathleen Kennedy and Rian Johnson, The Last Jedi director, were the main guests of the panel. At this stage the movie is in post-production but that didn’t stop us from getting a taste of the film. Rian showed some shots of the set that gave away some bits of information including the looks of the characters. We also know Finn joins the living again, and Rey has a lightsaber. Rey is a focus of the movie but the other Resistance fighters are also a large part. From the shots, Rey looks as if she is spending her time with Luke Skywalker and training to be a Jedi.

The film was shot at Pinewood Studios in England where Star Wars films are made. Josh Gad, writer and actor who starred as Olaf in Frozen, hosted the panel. He is also a comedian and has been trying desperately to get Daisy Ridley to talk about the film. He even tried again today with no luck, even BB-8 refused to talk. Yes our beloved little droid, BB-8, came rolling on stage. He is going to have a large part in the film as a fun character bringing comedy to a seemingly darker movie than Force Awakens.   As J.J. Abrams told Rian Johnson we can never have enough BB-8.

Again with the entire Celebration some of the memorable shots were those showing Carrie Fisher as Princess Leia. Not enough can be said about her and she will be in Episode VIII as General Leia. The latest news has Disney and Lucasfilm using unused footage for Leia shots in Episode IX. We do not yet know what these shots will be used for in the last film of the new trilogy. What we do know is there will not be a CGI Leia.

It was great fun to listen to Josh try and coax anything out of Daisy Ridley, even getting her last name. Only known as Rey doesn’t make much sense, so who is she? We might or might not find out but Daisy does say we get into her story. She did go on to say what we find out might not be what we expect.

What is so amazing about Rey? She is a strong female role model that young girls can look up to just like they did for Leia. Rey is the future Leia for so many people. Walking around the Celebration floor you can see how much Rey influenced women around the world; there are many Reys both young and adult. She was left on her own, survived the harsh realities of Jakku only to make her mark in the Universe and find Luke, then train as a Jedi. However, Daisy Ridley can’t save the galaxy on her own, she needs help from the Resistance and one of those people is the converted Stormtrooper Finn played by John Boyega.

John Boyega had some more to say about the film and that he will recover to return to the Resistance in The Last Jedi. Last we saw of Finn he was laying in a medical unit injured from his fight with Kylo Ren. Finn didn’t join by himself; he had help from the best pilot in the Resistance, Poe Dameron. The good news besides him recovering is Finn and Poe Dameron’s relationship will grow. We saw a friendship form between the former Stormtrooper Finn and the Resistance pilot Poe since Finn helped Poe escape the First Order and finish his mission to bring back BB-8 and the map to Luke Skywalker.

Another thing we learned was a new character, Rose, will be introduced played by Kelly Marie Tran. She started out as a fan that attended Celebration London before getting the part in the movie. She also told the audience how she kept the role a secret even from her family. Rose is in the Resistance and a maintenance worker. She will be the Luke and Rey type, someone who is taken from their comfortable surroundings and thrown into a hero role, which they never asked for but must adapt to survive. It will be interesting to see how she is brought in and her final role in the film but it sounds like she is a major character.

Of course what panel is not complete with the great legendary Mark Hamill who just adores his fans. What was asked of him is if he talks in the film. He went on a very long answer about how he saw Rian Johnson as a director he could work with and how the backstory was only a part of the film.  Kathleen Kennedy had to remind us that Luke Skywalker is more important to the film then Mark underestimates. We aren’t going to get anything from Mark, he talked a lot but didn’t say anything, and he even said Luke communicates telepathically as a joke. He also loves to just tell us how much we mean to him. In turn Mark Hamill means a lot to the fans.

After Mark Hamill’s great talk we got what we all waited so long for, the trailer. Though not yet, they had to reveal The Last Jedi poster, which everyone who attended the live panel or saw it streaming got. That freaked out the audience, we wanted a trailer but the audience in their reaction loved the new poster. It is when you actually hear the collective response to something from a massive amount of fans can you really say what is great and what is not, and the poster is pretty awesome. 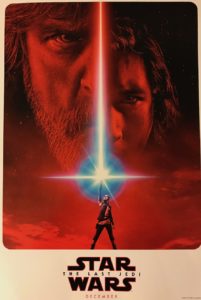 It is half Luke and half Kylo Ren, the light and the dark, and Rey with the saber in the middle bringing balance to the force.  However, both Luke and Kylo are in red, which could mean the downfall of the Jedi. We know something happened where Luke’s student Kylo Ren then known as Ben Solo turned to the darkside and struck down Luke’s fledgling Jedi order.  Luke failed but now with Rey there is new hope to bring balance to the force, either as a light Jedi, a beacon of hope, or something new.  The lightsaber also goes blue and then red with a bright white middle to symbolize the parts of the force. If you havent noticed Rey is also in a similiar stance as Luke in the 1977 poster for Episode IV. He was shown as the new hope for a galaxy fighting for freedom from the evil empire. This may be significant in the mivie. In the trailer we hear about the balance and this poster may speak to that.

In the trailer we get glimpses of many things going on and first is Rey seen training with Luke to use the force. This was already given but we now have real images to back it up. We don’t see her face but Leia is shown planning something, looking on at a star chart as Rey says light when Luke asks her what she sees. Is this meditation or a part of the training like when Luke visited the cave on Dagohba? We don’t know from the trailer but it is clear Luke is bringing Rey to a conclusion about the Jedi. 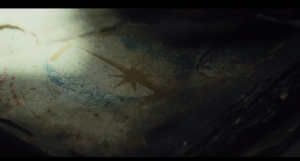 Kylo Ren’s mask that was discarded during the confrontation with Han is shown to symbolize the darkside of the force. Going back to the poster and Kylo is represented prominently along with Luke. Rey in what looks to be in a Jedi temple with the ancient symbol of the Jedi order shown when she says “balance”. Is she the one that brings balance to the force, going back to the prophecy that started everything and mentioned by Yoda? Or does this symbolize the grey order, the order of Jedi that follows neither the dark nor the light. 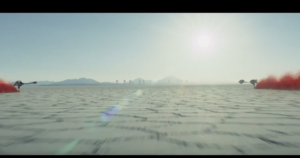 Going forward beyond the Jedi we see the Resistence in new vehicles on a plain heading toward AT-ATs with red smoke. Poe and BB-8 are running only to witness his X-Wing get blown up with a First Order attack. Whatever is going on the Resistance looks to be in trouble but still fighting back as shown in the battle scene with Republic ships. We know the seat of the Republic was destroyed by Starkiller base, does this mean that the Republic is now joining the fight against the power of the First Order. The Finn scene had him in a medical transport, but we know he comes back at some point in the movie. 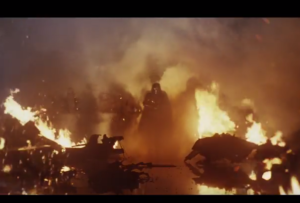 The Millennium Falcon shows up but we don’t know who is flying it but they are fighting the First Order. Kylo Ren with his scar is menacing and very dark as if the events of The Force Awakens propelled him further to the darkside. Are we actually going to see Captain Phasma in a larger role then in The Force Awakens? In the trailer she is leading an army of troopers, so maybe she does.

There is that scene where Luke is with R2 looking at a burning temple, perhaps.  This is something we will need to watch the movie to understand. However, it’s the last moment where we finally here Luke speak in person and tell Rey the Jedi must end. What does this mean? Does it mean the end to the way the Jedi where for millennium that created the problems in the galaxy or the Jedi should just cease to exist. Is there a connection to the balance of the force mentioned earlier? These questions will be answered in December when the movie is released. For now we can enjoy the trailer again. Stay tuned for more news and awesomeness from Star Wars Celebration.