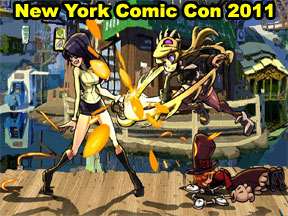 New York Comic Con is an experience not to be missed by anyone interested in video games, comics, or movies. While San Diego Comic Con is technically bigger at 120,000 attendees, New York Comic Con’s 100,000 will definitely give you the big con experience. The Javits Center keeps the events all in one location, which is nice for those of us who have attended cons that were spread out over several hotels. The weather for Thursday and Friday was muggy and warm. Friday evening showers cooled off the city and left perfect cool crisp weather for the remainder of the convention. New York in all its towering majesty is the perfect backdrop for the chaos and showmanship of Comic Con.

My NYCC experience started on Thursday afternoon when press lined up five deep and snaking downstairs and through and around the lobby for an opportunity for a first look. The line may have been long, but once the center opened the doors at four o’clock, it moved quickly.

I had an appointment first thing with the fantastic folks at Square Enix. I got to play Missing Link, the new DLC for Deus Ex, which takes place during the three days Adam goes missing in middle of the game. When The Missing Link starts, Adam is stripped of his enhancements. It really is a whole game of its own and has the same great game play you’d expect from Deus Ex.

After the Deus Ex DLC, I got to talk to Franko Fonseca, the Producer of Wakfu North America. He walked me through Wakfu, which is one of the most extensive MMORPGs I’ve ever seen. In addition to really cute graphics, the game has a political system that is so engaging players can actually run for office, and an environmental system so realistic that plants and animals can go extinct if they are overused as a resource.

From Wakfu I went to Final Fantasy XIII part 2. The game starts three years after the events of Final Fantasy XIII. Lightning is missing and Snow is gone. Serah knows something is wrong. She has a chance encounter with a man named Noel and together they go in search of Lightning. There have been some upgrades to the fighting system but the game offers the same beautiful graphics and intricate story that
Play Final Fantasy fans know and love.

After Square Enix showed me such great games, I took the rest of the evening to walk around the Javits Center and orient myself. I was lucky enough to stumble upon yyrGames and the developer Aaron Teplitsky. He makes these great old-school arcade games and he’s a really nice guy.

The Javits Center is huge with a capacity of 85,000 and a footprint that covers five city blocks. Thank goodness New York Comic Con had guides available with printed maps of the booths and lists of exhibitors, artists and panels. Along with the guide, anyone with a smart phone could download an app, which allowed users to mark favorites and plan their movements through the con. Even with all that, I found myself running around trying to get to everyone and everything I wanted to see. I spent a significant amount of my evening getting everything organized for the rest of the weekend.

For a complete change of pace, I left Cartoon Network to go to the Rockstar booth for a hands-off demo of Max Payne 3. Despite the fact that I couldn’t play the game, the demo was very impressive. I’m a Max Payne fan from the beginning, so I had high hopes for the new game. I was not disappointed. The game takes place a couple of years after Max Payne 2. Max is no longer a cop and has slipped into alcohol and pain killer addiction. Still Max is Max and it’s not long before he’s embroiled in another situation trying to protect a woman and trying to stay alive, this time in Sao Paola, Brazil. The best of the original is back. At its heart Max Payne 3 is a run-and-gun with bullet-time and a tight storyline, but this time there is a real cover mechanic, Max can shoot two guns at a time, and there is a bullet-cam that will blow you away.

After my time with Rockstar, I headed over to the 2K booth, which was designed like a dungeon cell with giant iron gates, where I played The Darkness II. I got a half hour to play the game and after all the crowds and noise and excitement around me, it was a relief to put the headset on and immerse myself in the game alone. I’m not generally a fan of horror titles, but The Darkness II has a comic book feel to it, which is important because it stays faithful to its graphic novel roots. Because of the art style, I was less terrified and more amused by some of the over-the-top violence and gore. I’m not sure what that says about me, but I really enjoyed playing The Darkness II. I was disappointed when the demo ended and I had to give the controller back.

From 2K, I went to the massive Capcon booth where I had a tour from Alejandro de la Sen, who is a really nice guy, despite kicking my butt at Street Fighter X Tekken.

It was a good day for Street Fighter fans because they also had the original Street Fighter for iOS available as well. After my thorough butt kicking, I was shown a game that is far more my speed. Dragon’s Dogma is an open world sandbox RPG that looks fantastic. The graphics are gorgeous and the game play will appeal to fantasy RPG players in a big way.

I wrapped up with more exhibitor visits, which included a stop by the Longbow Games booth. These guys do fantastic PC strategy games. They have a new one coming out in 2012 called Hegemony Rome. Check it out.

I thought Thursday and Friday were crowded, but they were nothing but wide-open spaces compared to Saturday when it felt like the entire city showed up for the con. The lines were thick around the gaming booths as everyone wanted an opportunity to play the new games or have game art signed by the artist or collect some of the free goodies like T-shirts and tote bags.

Fortunately for me, my Saturday began at the Autumn Games booth where I had the opportunity to have my butt kicked yet again. This time it was in Skullgirls, a 2D fighting game that is designed to do away with the annoying movement loops that make some fighting games get tedious after awhile. Skullgirls have no such loops. Try doing the same move too many times in a row and you lose access to it temporarily. Skullgirls will open with eight unique fighters. You won’t find repetitive moves in these girls. Each one is different and you can play them in any combo of 1 to 3 players versus 1 to 3 players. If you’re playing 1 player versus 3 players, adjustments are made in health and stamina to level the field somewhat. It’s a great game for serious fighting game aficionados, but it’s got all the tutorials built in that a novice player would need. All in all, Skullgirls is a great addition to the fighting game genre.

From Autumn Games, I slipped over to the Jagex booth to talk to Sean Charles about Transformers Universe. The game doesn’t premiere until 2012, but it’s looking pretty good already. Before I left, Sean gave me a T-shirt, a Decepticon T-shirt. Hmm. What was he trying to say?

My last demo of the day was for Shoot Many Robots a run-and-gun title from Demiurge and Ubisoft that was the funniest game I played during the con. The sheer number and ridiculous abilities of the weapons to choose from is almost overwhelming, but for once I didn’t totally get my butt kicked and since I didn’t mind leaving the baby carrier on my character, I actually unlocked the Fatherhood Trophy. It was a little moment of triumph in my day.

New York Comic Con is not for the feint of heart or the claustrophobic, but if you can handle the noise and the crowds, it’s an amazing amount of fun. The cosplay characters give the entire event a carnival feel and the exhibitors bring out the best of their best and the hungry public lines up to see it. The Javits Center is not far from Hell’s Kitchen and all the trendy restaurants of 9th Avenue, so when you’ve played all the games and taken pictures of all the anime characters and bought all the comics you can carry, a fifteen minute walk will get you off your feet and tucked into a delicious meal, so you’re ready to do it all again the next day. New York Comic Con – you’ve got see it to believe it.