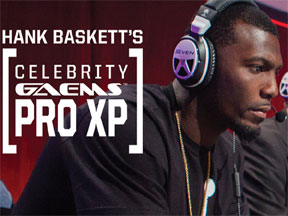 The arrival of Super Bowl Boulevard in New York meant that thousands of people effectively shut down Times Square in the days leading up to Super Bowl Sunday. Fortunately for me, HANK BASKETT’S FIRST ANNUAL CELEBRITY GAEMS XP event was being held at a ballroom in the Crowne Plaza Hotel at the edges of the massive outdoor event. There was definitely a line of excited fans at the hotel venue waiting for the games to begin, but unlike those unlucky football fans that were turned away from various activities on the boulevard due to overcrowding, we got in.

While waiting for the main event, attendees had a chance to browse the popup shop featuring Vanguard’s game environment for the Xbox One, while a DJ kept the beat. Also on display were various pieces of sports and music memorabilia for sale as part of a silent auction to benefit THE GRIFFIN GIVES FOUNDATION, which supports veterans and sick children. The memorabilia included an autographed photo of baseball player Jesse Owens, an autographed photo of a Bruce Springsteen concert performance, and autographed NFL helmets for various teams, including the NY Jets signed by, among others, Bill Baird.

In the main ballroom where the gaming took place, stations were set up for participants. There were multiple Vanguard game environment stations with headphones for both fans and celebrities to play FIFA14 and NBA2K2014. There were matches on the main stage for Call of Duty: Ghosts and the three LG television monitors above the stage alternately playing the video feed from the Vanguard Xbox stations of the celebrity death matches from players on the stage, including Philadelphia Eagles players like James Brewer, and DJ Skribble.

Alex Mendez provided color commentary for Call of Duty: Ghosts. There were two stations with large screen televisions on either side at the foot of the stage, where fans could play Need for Speed: Rivals. There were also two stations set up on the left side of the ballroom exclusively for fans to play Dance Central 3.

Baskett, in one of several brief comments to the audience, described himself as a lifelong gamer. Baskett said he plays against his wife Kendra Wilkinson on Dance Central, at which she is very skilled, but he only jokingly claims to be better than her. Baskett competed against one of the reporters covering the event while Kendra, six months pregnant, challenged a young woman who won an LG flat screen television in the raffle.

Baskett was the winner of the final death match in Call of Duty that took place on the central stage. He said his skills were called into question, but he put an end to any doubt about his love and talent for first person shooters. Baskett thanked everyone for making the event a success, and reiterated that the foundation was going to be able to bring games to a lot of sick children as a result. He also promised that the tournament would be a recurring event.

GiN looks forward to attending this worthy and fun cause in the future.