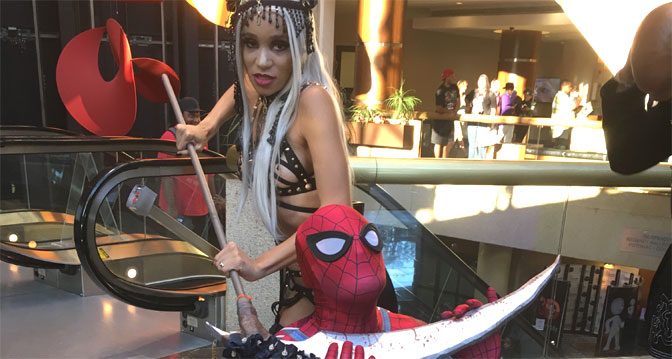 I attended day two of the BLERD Conference, and I must say I was overwhelmed by this world previously unbeknownst to me.

Swarming inside the Hilton Hotel Crystal City was a population of intricately constructed costumes in a panoply of colors, representing everything from the gaming, comic books and mythology worlds. 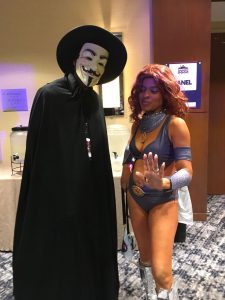 It was clear that the BLERD cosplayers heavily invested in their wares, which symbolized their avid passions. Through their diligence, they created in physical form the worlds they witnessed in their digital media excursions.

Many of the cosplayers were not only steeped in the history, lexicon, and culture but were designers, producers, writers, and actors themselves.

One notable British fellow of which I attended his panel discussion cleverly fused hip hop and Star Wars cultures into a red Stormtrooper costume with Adidas and Champion embroidery, sporting a red boom box custom designed for his needs. 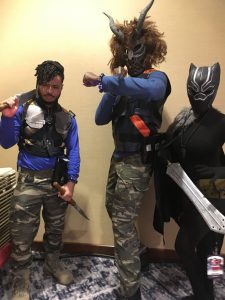 There was a range of notability, from social media gurus to crew members of the film Black Panther. It was clear however, that no matter what level one was functioning, everyone felt embraced and included, which is extremely refreshing to a population who has felt marginalized in these worlds because of their skin, nationality, and sexuality, and subsequently subjected to cosplay bullying and other offenses.

“I love this movement now. [It is a] fresh community of freedom, with no superstars,” said one panelist at the Heroes of Diversity panel sponsored by LGBT BLERD. They shared their journey into cosplay, as well as critiquing the state of diversity in comic book film and television series such as Luke Cage and Black Lightning. 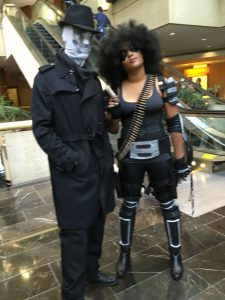 The consensus in the room was that Hollywood has a long way to go. Many BLERD cosplayers still feel invisible in the industry. One panelist rhetorically inquired, “I cannot exist but there are elves?”

Writer/Actor/Producer Chad Eric Smith echoed this sentiment in the Future of Afrofuturism panel discussion. He recalled watching The Flintstones and The Jetsons, and not seeing characters of color in either series. “[So we had] no representation in the past or the future,” Smith said. 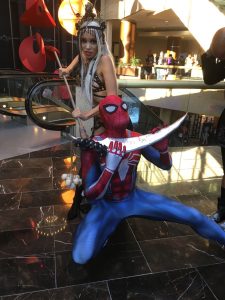 Though Black Panther is a measurable indicator for the demand by audiences to see images of color on screen, they still remain the brainchildren of white and Jewish creators like the legendary Stan Lee. “Black Panther was not created by us, but re-imagined by us,” Author L.H. Moore said.

Which makes crafting this world critical. The panelists emphasized the need as writers and creators to be true to themselves, to ensure that cultural authenticity is preserved, celebrated, and perpetuated while delving into the world of science fiction. “Afrofuturism is not just a genre. It’s a movement,” Moore stated.

Indeed BLERD has all the makings of a major national movement, such as Otakon and Comic-Con. Only in its second year, the BLERD conference has doubled in its size and success. I look forward to attending next year.