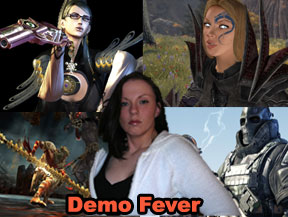 For Mature gamers only

My list of games that I want is already filling up thanks to the release of several demos in the Live store. It all started with me getting into the early release of Bayonetta's demo in late November.

Bayonetta is Hideki Kamiya of Platinum Games latest project. I remember him from creating games such as Devil May Cry and Viewtiful Joe. Bayonetta is an action, fighter, and auto-shooter with a long dark haired vixen wearing glasses in a librarian's sexy look. She packs heat and not just in her hands, but also the heels of her boots are barrels.

A member of an ancient clan with amazing powers unlocking a ballet of combat using three primary attack buttons, dodging attacks to trigger time to slow. This allows for extra damage to be dealt and "torture" moves to be preformed.

In the demo you battle on pieces of a clock tower falling, a section of bridge being swung around by a giant monster, and finally in a courtyard to hordes of enemies. I really enjoyed playing this demo other than the soundtrack, which I hope the full game will change up a bit. Publisher Sega will release this title in North America on 1/5/2010, rated M.

The next demo that hit was Army of Two 40th Day, a sequel to a game that I really loved. Here we get a two-player co-op via split screen or public/private. Our favorite wise cracking mercenaries for hire are back, Tyson Rios and Elliot Salem and now they are in Shanghai, China.

They own TWO (TransWorld Operations), a private military contracting company (PMC) and are on a basic mission in China when another PMC attacks the city. The goal is survival.

Along the way you have morality choices, where you will choose one path or another and it will affect the outcome of the story. There are noticeable upgrades to the cover system, which is more automatic now, and you have more options, like feigning surrender or death and taking human shields.

The best part is the guns baby! Oh the joys of pimping out your arsenal and really customizing by adding one assault rifle barrel to another assault riffle and an added bonus is the ability to carry four rather then three! Since this was a two-player demo, we don't get to see if the AI is smarter then before. EA will bring us this title to America on 1/12/2010, rated M.

The PC RPG Divine Divinity brings us a demo of the sequel Divinity 2: Ego Draconis. You are in Rivellon, a magical world that is a bit torn and scarred from war. The order of the Dragon Slayers is enemies with the Dragon Knights, who killed their hero. A dying Dragon Knight gives her powers to a member of the order and you play as this member. In the demo you play as a male and character customizations including gender will come with the full game.

The world is beautiful and the demo runs smoothly on the console. You will get to interact with the villagers and get to choose your class, which becomes more flexible as you go. There is a priest, mage, warrior, ranger and dragon slayer. The main difference with Divinity 2 and other RPG's is a huge classless skill tree where you can control what to focus on or to spread the wealth evenly.

The ability to mind read is unlocked in the demo and is rather nice, instead of guessing with a barrage of 20 questions to get an answer you can simply spend some experience points and delve into their mind. The game states you will obtain the ability to shape shift into a dragon and fight as human or dragon! Larian Studios with CDV Software will release the game on 1/5/2010, rated M.

The final one is the most anticipated in my house, Dante's Inferno, based upon Dante Alighieri's epic poem, The Divine Comedy.

The demo consists of the entire opening level "Gates of Hell." You play Dante, an Italian Mercenary who comes home from fighting to find his beloved, Beatrice, murdered and her soul pulled into hell. He will battle Death and obtain his scythe to tear open the gates of hell to find his beloved and save her.

While playing the demo I was reminded of God of War, in respects to how the attacks and character movement handled when fighting. The graphics are beautiful and the detail is amazing.

The demo just gives you a taste but the full game will take you through the nine circles of hell: limbo, lust, gluttony, greed, anger, heresy, violence, fraud, and treachery. I'm sure Dante will find more out about himself on his journey.

You as the player will have a choice of fighting the more righteous path or sacrificing a bit of your health and manna by taking martyrdom. EA schedule the release of Dante's Inferno for 2/9/2010, rated M.

So there you have it. Grab some of these great demos if you are looking for a good time, and you won't have to wait too long for the full games in any case.