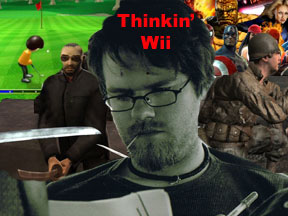 Let's say you go to a movie that's so good you give it a standing ovation at the end. Then, for rhetoric's sake, let's say that you find out that there's been a game made of this movie, so you go and spend your hard earned money for the thing only to find out that the developers completely dropped the ball and churned out a lifeless monstrosity bearing the movie's title just to sell a few games (I'm looking at you Fight Club).

There was absolutely no reason for the game to be made, you say. No reason whatsoever.

Just because it worked well on one screen doesn't mean that someone's going to take the time to make it just as good on a smaller one.

This is the way I'm feeling about some Wii games right now.

Before you get all churned up and start spouting off some Nintendo propaganda, let me go on record as saying that I think the Wii is the best thing since Wikipedia. It's affordable and it's innovative, so much so that it seems to be the only system out there with the true right to don the moniker "Next Gen."

The PS3 and the 360 are big and gorgeous, sure, but they aren't doing much different from what their younger siblings were doing a few years ago. There's no new controller designs here, nor is there much that is not in the interest of the companies manufacturing the consoles in the first place. But this is getting into an entirely different subject.

Suffice it to say that I believe the Wii to be a great system that should not even be compared to the PS3 or the 360, save for when it tries to get into the cross-platforming market and push poorly adapted games onto its players. Then it should, in many cases, be smashed-verbally, of course.

For an example, let's look at Call of Duty 3 and Marvel: Ultimate Alliance. These are two games that have been hoisted up and praised, for the most part, as being two enjoyable games. They are pretty, have lots of extra features, and tend to have a strong structural plot. These kind of things go for all the platforms on which they appear, but only on the Wii are they, for the most part, clumsy and monumentally frustrating when used with the new control design.

In essence, they were barely worth the faÃ§ade of being in competition with the other platforms.

Playing games like Red Steel or, heck, even Wii Sports, we see how great the controls can be in a game, but for something that's meant to be played with a traditional controller, the Wii just doesn't stack up.

I've chosen these two specific games to show different severities in my argument.

In Marvel, we have a game that really doesn't add up to more than a button masher on the Wii. Sure there are different combos and special tricks, but let's not overlook the fact that you can get through a level by simply pressing the A button repeatedly with no consequences. So where's the innovation in that? We got the Wii to feel like we're more a part of the action.

I mean, it shows a kid on the back of the box holding the controller in Spidey's webslinging position! I never did that once in that game! Heck, I barely even mock-slashed anyone with the controller while playing as Wolverine.

On the other end, we have Call of Duty 3. Now, I'll give it effort points for at least trying to integrate the new controls into the game play. Obviously, since it's a first-person shooter, it has a few things going for it right off, but the problem comes from how finicky the controls work with the game.

Trying to aim sometimes becomes a problem, as I tend to start twirling in place while the Nazis laugh and shoot me relentlessly. Also, heaven forbid an enemy should try wrestling my gun away from me. It takes forever to fight them off and half the time I lose without really knowing why.

So far, I've had nothing but high praise for Wii exclusives. I have extremely high hopes for games like Nibris's Sadness, Metroid Prime 3, and Resident Evil: Umbrella Chronicles; however, I find myself worrying for games like Manhunt 2 (assuming it ever sees the light of day), a potentially great game that may fall flat on its face when it comes to the Wii.

Hopefully, time and awareness will fix these kinds of glitches, but at this point, I'm sticking to Elebits and Twilight Princess.