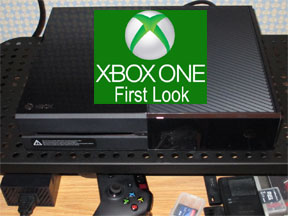 When Microsoft announced the Xbox One, the reaction they received was less than positive in many corners of the gaming world. A new emphasis on cloud-powered gaming, the possibility of used games becoming obsolete, and an always-on Internet connection had some gamers up in arms and scratching their heads.

A few backtracks and modifications later, Microsoft’s new machine began to take form in the public eye, replete with the usual marketing conjecture that we get with every new console generation.

And when Nov. 22 rolled around, Microsoft did something else: They delivered. Simply put, the Xbox One is an astounding technological marvel. Because there are so many facets to the system, I’m breaking this first look and review into multiple segments.

If the Xbox One were a boxer, it would undoubtedly be a heavyweight. In an age that sees technology getting smaller and more compact, the Xbox One presents a design that’s oversized and expansive. It’s a giant black box of imposing power that leaves no doubt who’s in charge, laughing at your other puny electronic devices with condescending bemusement.

Overly detailed personification aside, the Xbox One really and truly is huge, but with good reason. Much of the space inside the system addresses the issue of ventilation that had infamously plagued the 360 with the dreaded Red Ring of Death. Bearing in mind that Microsoft designed the system to be a full-entertainment unit, the system has to be able to run for extended periods of time without overheating critical parts. From my experience with it, the Xbox One does just that without issue.

Because it can also hook up to a cable box/DVR, the system also boasts an HDMI-In port, and when used in that manner, it effectively turns any HD TV into a smart TV through the use of Kinect.

The Xbox One’s menu system offers a deceptive familiarity at first glance. I say deceptive because longtime 360 enthusiasts will immediately feel right when the system boots up – and promptly realize they have absolutely no idea where anything actually is. The new navigation scheme has a slight learning curve unto itself, but it’s made easier with the new Kinect. The Kinect is also vastly improved. I’ll devote an entire section just to that.

The overall look has been consolidated into a set of expandable, block-like subsets. (Put another way, it’s Windows 8.) Once you actually figure out what options live under what subset, it’s actually not a bad design, and it quickly becomes apparent that there are multiple ways to navigate to the same endpoint. For instance, you can access the friends screen through two or three different menus, keeping everything close at hand.

A new feature called “Snap” also enhances navigation, but that’s not its sole purpose. Snap is the Xbox One’s system that allows users to open multiple apps simultaneously and switch between them with almost no effort. After about half an hour, the new interface had already begun to feel natural.

As I alluded to earlier, the new Kinect brings the system to life with a set of brilliant voice commands that make navigating most menus unnecessary if you choose. Instead of clicking to the friends screen, it’s possible to say, “Xbox go to friends,” and the system opens the friends menu.

It’s far more intuitive than that though. Managing a party in the middle of a game has always been a challenge on the 360 because you had to stop, open the menu, send the invite and hope that the in-game action didn’t deal out a harsh punishment while you were otherwise occupied. Kinect eliminates this with the basic command, “Xbox go to party.”

To make the system even easier, saying, “Xbox select,” highlights anything on the screen that you can use as a voice command. With the default settings, saying, “Xbox on,” also powers up the unit. As a side note, I turned this feature off fearing what may happen if I accidentally uttered those two words in conversation. Better safe than sorry.

For households with multiple accounts on the system, Kinect has an ingenious way of knowing who’s playing the system: It recognizes you, and it does it quickly. It may not be an earth-shattering feature, but it lends itself to the overall feel that this really is the next generation here and now.

The new Xbox One controller features a similar design to the 360’s, with several differences. To start with, there’s no battery pack on the bottom. Instead, there’s a battery compartment built right in, which serves to decrease the controller’s size and weight.

But lighter weight doesn’t mean less durability. This new controller feels sturdier and more responsive than its predecessor. The better feel is thanks in part to Microsoft addressing the 360 controller’s flimsy D-pad with a newer, what some may call “true,” design that feels like a controller should.

Microsoft also updated the two trigger buttons, giving each one independent rumble. That means that in Forza 5, if you slam on the brakes and start to lose traction, the left trigger, used for braking, starts to rumble. The right side, however, doesn’t provide feedback while that’s happening. It’s just an example of how much detail went into designing the system, and it immerses you into the games even more.

Although there have been some launch bugs, mostly pertaining to software and a small number of users with broken disc drives, my experience with the Xbox One has been nothing but positive. The graphics are stunning, the design is well-built and the full Kinect integration feels like something out of George Jetson’s living room.

As Microsoft continues refining their new console, the Xbox One is only going to get better. Microsoft made some lofty promises and bold claims when they announced the Xbox One, and they delivered with a stellar machine that genuinely feels like it came from the future.