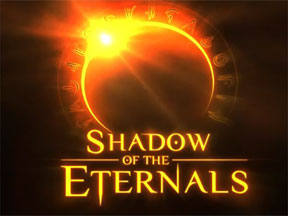 Shadow of the Eternals

Back in 2002 there was a game released on the Nintendo Gamecube whose core concept was so well received that Nintendo put a patent on it to inhibit its use by others. It was innovative, engaging, and had many game reviewers buzzing to give it awards for best story, music, and just being one of the best, if not THE best, Gamecube game of the year. The game which I’m referring to is Eternal Darkness: Sanity’s Requiem.

Known for having a very creative use of a sanity function, the game not only had a dark tale to tell but also did it in a way that broke the fourth wall and messed with the players that picked it up. I found myself pulled in on several occasions where the game’s illusions and lies tricked me into believing that the things that were happening were real rather than just insanity.

But although the sanity level function is what made this game so refreshing, the concept, characters and story elements were engaging to a point that had many wanting more.

Throughout Eternal Darkness you play as several characters who are all involved in a plot that has lasted for centuries. Nearly all are dragged in unwillingly via unfortunate circumstance, and all play a vital role in protecting mankind from an unseen threat that lays lurking “beyond the veil of reality.” Artifacts filled with magick are passed among hands, and you play as all of those hands, seeing how each tale unfolds into the next as you fight to keep the Ancients out of the world lest it be destroyed. With a story so profound it was only natural that at the end several fans cried out for a sequel.

Unfortunately, it was a sequel that never came.

Until now that is. With the launch of Shadow of the Eternals’ campaign, the story that started with the murder of Alexandra Roivas’ grandfather now continues, at least in spirit. It is said that Shadow of the Eternals is not a direct sequel, but it does feature the same lore style, sanity features, and chilling tone.

Like Eternal Darkness did, in this new game you will be playing several characters who are all involved in the same mission. What that mission is though, nothing on the godly scale has been confirmed.

Over a period of 12 separately released episodes you will playing these different characters, and according to Precursor Games, these episodes are going to be taking the player base into account with how the story will unfold in some aspects. Already they have taken up talking with their interested parties in their forums, where several fans have been inserting ideas and letting themselves become enveloped in the lore and atmosphere that Eternal Darkness and Shadow of the Eternals creates.

With this I’m happy to say that what bits have been released have many avid fans drooling, and already the game has acquired a decent sum of backing in just a few days of its kickstarter. Unfortunately, there is still a long way to go and not a lot of time to get there. With a goal of earning 1.5 million dollars in just 30 days, the Shadow of the Eternals campaign is nothing if not ambitious.

This is where I implore people to help out, especially if you are a fan of the prior game. Already Shadow of the Eternals holds such promise and it would be a shame to see it fail due to lack of finances. A $5 fee is the lowest donation amount, and with that securing you a copy of the first chapter of the game upon release, I believe it to be a good investment.

So for anyone who owns a Wii-U or a PC, as it is to be released on both, if you are interested in bringing Shadow of the Eternals to life then visit their kickstarter page to offer your support. This game has already earned my donation, and I have no desire to see what promises to be a great game fail before it’s even begun. So the rest is now up to you.