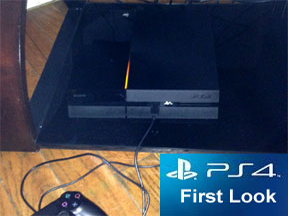 I got my PS4 on Sunday the 17th and for reasons beyond my control I couldn’t set it up until Monday the 18th. I was hoping that the three day delay would improve my experience with downloads and the PlayStation Network (PSN). That turned out to be more or less true. I did have difficulty connecting to PSN this morning when I originally set it up. Then I had to leave the house. When I came back this afternoon, I connected to PSN without any problem.

As for the console itself, it’s nice. It’s a sleek design, but larger than I was expecting. It’s almost the same size as the PS3. I guess I’m used to new technology being thinner than it’s predecessors. Unlike the PS3, the PS4 doesn’t have the lip for the power button and for the Blu-ray that as far as I’m concerned only exists to collect dust. The PS4 doesn’t appear to have a place for the Blu-ray at all, but it does have a nice hidden groove. It doesn’t have a traditional power button, instead you press on the vertical bar. The bar does have a tiny little power symbol on it, but you have to look for it to see it, below that is another bar with a tiny little eject symbol. I didn’t initially notice either symbol, but where to insert the Blu-ray and how to eject it felt really intuitive to me.

So far, I’ve signed into the PSN network, played a game (you’ll see a review of that in a couple of days) and played a non-HD DVD. Here’s what I can tell you: The PS4’s graphics are noticeably sharper for both the games and DVDs. That surprised me because I was really happy with how games and videos looked on my PS3. Is this a huge difference? No, but it is noticeable.

The new controller is very nice. It feels enough like the old controller to be familiar and comfortable, but it has dual motors for better feedback and a touchpad, which so far I haven’t used, but it’s there and in a true stroke of genius, a headphone jack. Wow. Why did that take so long to figure out? It also has a light bar to interact with the camera for The Playroom, but more on that later. Suffice it to say, the controller is very nice.

I also like the new home screen. There is less scrolling around for what I want to do. Like the game and DVD, the home screen is noticeably sharper with that weird undulating vibe that Sony seems to love so much. The setup was easy except that I couldn’t sign in to PSN at first. Other than that, it was a breeze, although Sony seems to think I want to share all my gaming on Facebook. Sony, my mother doesn’t need to know how much time I spend playing games, and neither do the people I went to high school with, nor do any of them care. The truth is I’m not much of an online game person. I like to play by myself. When I want to interact with other people, I prefer to do it in person. I’m old-fashioned that way. I know Google and every other online anything wants us all to be friends, but I find that tedious. I have enough friends. They’re all lovely people. Let it go.

Something I didn’t explore was The Playroom. I don’t have a camera because I don’t generally like my technology looking at me. I did watch the ‘Show me what it can do!’ video and I still don’t get it. That is quite possibly the least informative video I’ve ever seen and it certainly didn’t make me want to run out and buy a camera for my PS4. I guess I’ll eventually look for user videos on YouTube to help me decide. I used to have a camera on my Xbox 360, and while it worked exactly like it was supposed to, I just didn’t get into any of the games that used it, so I eventually gave it to my sister for one of her games. So far the PS4 hasn’t changed my opinion on cameras.

Should you run out and try to get your hands on a PS4 as soon as possible? That depends. Do you have money to burn? Are you an avid gamer? Then by all means you should own one, although fair warning, there are only a handful of titles available right now, so you should check and see what they are before spending your cash. For everyone else, wait awhile. Normally, I don’t like to buy a new game system until it’s been out for a few months. I like other people to work the kinks out before I get mine. Alas though, it was my turn on the GiN team to be the early adopter. Someone else on our team gets to work out the kinks on the Xbox One. I’ll wait a few months before getting one of those.