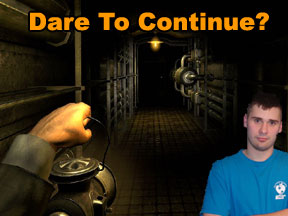 It’s the most wonderful time of the year. No, not that time, which is also pretty good for gamers. No I am talking about the time when monsters roam the streets, wanting candy instead of blood. Adults get to attend cool dress up parties and the girls always look great in their sexy demon, cat or vampire costumes. Plus we get to indulge in lots of fun treats. Candy for the kids. Apple cider for everyone. And lots of harder fall-themed beverages for the adults.

One of the things that I personally like to do to celebrate the season is to load up some scary games and have a great time playing them. I find that a really good horror game is even better than a scary movie, because you control the fate of the main character. In a way, keeping them alive is like keeping yourself from becoming another victim. That responsibility is both thrilling and chilling.

But horror games have over the last two years or so been on a bit of a decline. I know because every year I do a report on the state of horror games in the industry. Sometimes its part of a GiN Lounge Podcast, and sometimes, like today, its an editorial. So I keep my finger on the pulse of horror gaming.

Unfortunately, the last few years have not been too good. I pretty much had to default back to a few good ones like Doom 3 to keep the home fires burning on the scariest night of the year.

This year however, we are seeing a light at the end of the tunnel. I had the opportunity to play some top notch horror titles this time around. So for the first time in three years at GiN, I can proudly say the year of great scares has come roaring back, and I want to highlight a couple titles that give hope to what is hopefully a resurging genre.

Resident Evil Revelations: One of the more polarizing series around. This old series has a steep divide between two different generations of fans. You have the old school players who prefer the first three, while a second group who prefers the run and gun feel of the later ones. Resident Evil Revelations brought the gap closed a little by bringing the old survival element back. In addition to allowing you to use Jill instead of the normal two protagonists, it’s nice to see Capcom doing what they can to try to combine the two styles into one perfect game.

Metro Last Light: One game that has really slid under quite a few radars although our alert chief editor described the game as one of the best to come out this year. Developer 4A Games and publisher Deep Silver gave us a first person shooter with scary good graphics as well as creatures. The lighting is perfectly done and plays on your buried paranoid self. Don’t look at me like that, you know you are paranoid deep down. This game will draw that out. When the monsters do show themselves, they are well designed and drawn to enhance the horror experience. And sometimes deep inside the metro, the humans are the real monsters. While Metro is holding its value, it’s worth the money.

In the realm of horror though, it seems to be the indy studios that are leading the charge. Billy White has been having a lot of fun with an old-school style episodic adventure game called The Last Door by The Game Kitchen. Sort of like the old Kings Quest video games in terms of graphics, it has a deep story and is surprisingly able to scare its players.

Then we have Betrayer, which is, believe it or not, a shooter set during colonial times. Told using just black and white backgrounds, with red for emphasis, Betrayer from Blackpowder Games is as frightening as it is unique.

Last but not least, Amnesia: A Machine for Pigs is probably one of the most scariest we’ve played in years. Kudos to developer The Chinese Room for putting that frightfest together.

While there are fewer horror enthusiasts like me in the gaming world compared to the overall population, I think most people like a good scare, though I understand that the experience is too intense for some players. It’s nice to see horror games making a bit of a comeback, and hitting all areas from casual the hardcore players.

Even with all the new stuff, don’t be afraid to have a little fun with the older titles. And before anyone (I’m looking at you Todd Hargosh) brings up the issue with having to switch between a gun and a flashlight in DOOM 3, know that it’s been fixed. Recently released was the Doom 3 BFG edition for the XBox 360 where that problem has been remedied along with a small graphics overhaul. Give it a try!

So remember gamers, even if you don’t go trick or treating, there’s still plenty to do on the best night of the year. I’ll be playing F.E.A.R. with the lights down low. Perhaps you can join me.